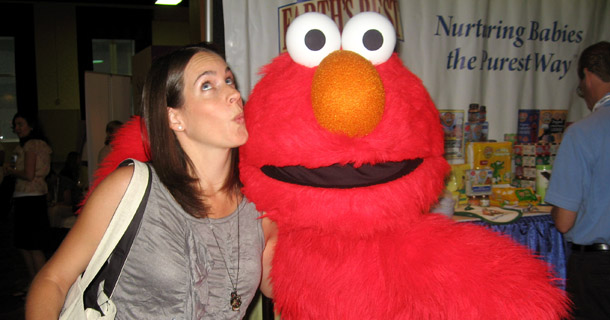 After being gone for four days, nothing could have warmed my heart more than seeing my three favorite boys standing on the airport steps waiting to take me home. Their eyes lit up, Big’s arms wrapped around me, Little’s sloppy kisses wet my face and the chatter began. They survived. (I knew they would.) And more importantly, I survived. (I didn’t know I would.)

No doubt they missed me. In fact, Big was too distraught to talk to me on the phone while I was away because it made him miss me more. Little slept much later than usual—an obvious sign of his depression (at least that’s how I’m explaining the fact that he wakes up at the crack of dawn when I’m home, but miraculously doesn’t when I’m away).

No doubt I missed them. I hit up every BlogHer booth imaginable for the kid-friendly freebies in anticipation of my return (shameless, I know). And while I somehow didn’t take a picture while with one of my best friends I hadn’t seen in years (which was wonderful!), I did take a picture with Elmo and Mrs. Potato Head (also sort of wonderful).

We fell back into a normal rhythm pretty quickly and spent the day catching up (in other words sifting through my suitcase asking me what I got them). It seemed like both boys had already forgotten I left them.

Until later in the afternoon. Little kept sneaking up, hugging my legs and sweetly cooing, “Mama.” And Big, well, cried. A lot. He cried about nothing in particular. At least nothing he could express. But this is what he does, what he’s always done. He’s on his best behavior the whole time I’m gone and then when I get back he lets his guard down. And breaks down. Last night he cried himself to sleep asking me to just stay with him all night so he’d know I was there. There it was. The most innocent and honest guilt trip. And oh how I wanted to make it up to him by staying right there all night, because there was no place I would have rather been. But I tiptoed out as soon as his eyelids stopped fluttering and his hand went limp in mine. I had things to get done.

So while it’s easy to feel guilty—guilty about going away and leaving my family, guilty about not wanting to—I’m doing my best to just cherish being home again. To enjoy their spontaneous dancing and silly facial expressions. Their loud talking and impressive wrestling moves. Their pure hearts and their love for me. Because that’s why I do it all…even when I’m away.