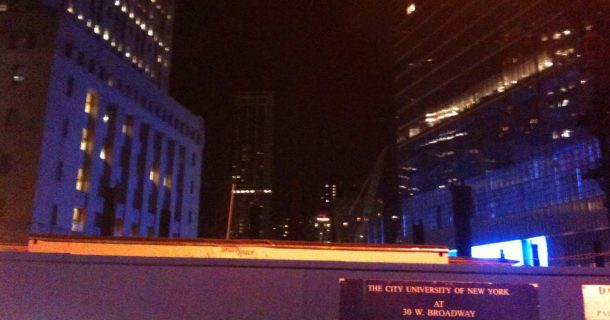 We all have our September 11th stories. Mine happens to include putting my boyfriend (now husband) and cousin on planes first thing in the morning the day after my grandmother’s funeral in Denver. After driving back to my grandmother’s house, I couldn’t fall back asleep, so I turned on the TV to catch a bit of the Today Show. But instead of fashion tips and human interest stories, I was watching smoke, panic and confusion.

A plane had crashed into one of the World Trade Center towers. I watched in horror as the second plane hit. The speculation started…this was no coincidence and no plane in the air was safe. I don’t remember if it was minutes or hours (did we even have cell phones back then?), but it felt like days before I heard that my loved ones had never left the ground. They were safe.

Many people’s stories ended quite differently that day. And I saw this firsthand on a trip to New York just six months later. I was reminded of this when I was in New York a month ago—my friends and I happened upon Ground Zero during a lovely post-dinner walk. It was after 10pm on Saturday night. The business district should have been dark and quiet. But in the vast open space ahead of us, construction lights were shining bright and cranes were hard at work. Nine. Years. Later.

I was inspired to track down this piece I wrote in April of 2002—I guess it’s really a blog post before there was such a thing. I wanted to share it in honor of those who were impacted by September 11th…and I have to believe that’s pretty much everybody.

Down the west side of Manhattan we drove. Up ahead loomed our destination. The financial district, Merrill Lynch and, yes, Ground Zero. Eventually we got out of the cab. And we walked.

We walked and walked, finally landing at the entrance to Merrill. We took an escalator up, passed through the first layer of security, x-ray machines and onto the second layer of security. After giving our names, taking a picture for a temporary ID and waiting for my roommate’s former boss, Josh, to come get us, we finally headed up to his office. Out the window of the 18th floor, the view was stunning. The Hudson River gleamed and the Statue of Liberty stood tall with pride.

Then I looked left. And I saw it. Having just told Josh what an amazing view he had, I felt as though someone kicked me in the stomach. His reality had been completely altered in minutes. And right outside his window was the evidence of it.

As he told us his September 11th escape story, I looked on in awe. I took pictures. It seemed crazy to do so, but there in front of me was history. I needed to grasp it in a physical way because I couldn’t emotionally.

Between Ground Zero and Merrill stood a glass structure called the Winter Garden Building. Its metal structure appeared virtually unharmed. But below, where we couldn’t see, Josh said it was an absolute mess. The glass pieces that broke through when debris landed on them destroyed the beautiful, rare marble floors below. He explained that the mine this marble came from was depleted and now experts are searching the world to find a match. The hope is that this place will be put back together exactly the way it was before September 11th, but that may be impossible. I’d guess it will be.

Looking out towards where the Towers had been was another Merrill Lynch building. The 40th story of that building was our next stop. That’s where we could see everything. We headed out with Josh as our tour guide. The elevator landed at a level once crowded by restaurant patrons. The eateries had been closed because there just weren’t enough people to feed anymore. Many offices in the area remained unoccupied, and what used to be a center of life was now quite the opposite. These empty restaurants now served as mortuaries.

We walked on to the next building. After winding our way through more security, we headed up to the 40th floor. At the window we saw the massive devastation. From so high up, it seemed small in a strange way. I knew it wasn’t though because I couldn’t fit the entire area into my camera lens. Then, as I realized the enormity of other buildings nearby, it struck me. Ten of those monstrosities could have fit in the vacant space in front of me.

I continued to look around and take it all in. Flags hung from buildings scarred by the falling debris. Cranes worked alongside the firefighters and police.

Then everything seemed to stop.

Within minutes all of the workers had lined up on a temporary road. I asked what was going on a couple times and got no response. Finally Josh looked again and noted that there was an ambulance at the top of the road. They’d found a body. I looked closer and saw a group of men raising a flag-covered gurney off the ground. They marched slowly, methodically, heavily up the road. As they passed, the line of patriots saluted this life. This hero.

Other people who worked in the Merrill building gathered at the window. They’d say things like, “Found another one, eh?” It seemed all too normal to them. Then I found out why. The rescue team had built a road to remove the debris from the site months ago. Now that the area was cleared, the road was taken down and moved to the spot where the people now stood. Underneath the original road, bodies were found every day. That had been the lobby of one of the towers.

Eventually we decided to leave. It was too much to just stand there and watch. All day, I found myself reflecting—not just about Ground Zero, but about the glass Winter Garden Building. It seemed so symbolic of the people I had met who witnessed that horrible day. Still a little beaten up on the outside, but nothing time wouldn’t mend. It’s the ruin that lives deep down inside that’s irreparable. It’s the part we can’t see that proves September 11th has forever scarred that building—and those bystanders—in ways you and I will never know.