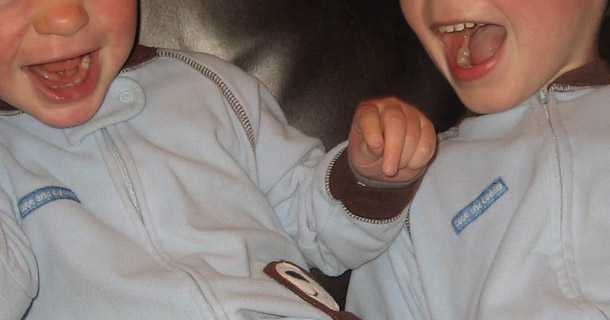 On our first date, Lenny (as I lovingly refer to my husband) and I went to see Austin Powers. If you’ve seen it, you know that it’s packed with classic one-liners (and if you haven’t, shame on you). There’s one line in particular that’s become a theme around our house: “I’m having trouble controlling THE VOLUME OF MY VOICE!”

That’s right. This itty-bitty house has two of the loudest talking boys on the planet—no exaggeration.

When Big was 5 months old he began screaming—glass-shattering shrieks. They weren’t angry—more joyful really—but they were jarring nonetheless. Especially when they started at about 5:30am. (Did I mention this overlapped with a hotel stay, which meant that we had to duck through the halls praying no one would call us out?)

We were about to start our nanny share at the time and I was nervous Big was going to scare the other baby. I wrote to our local mom’s group asking for advice on how to curb this behavior. Though I’m sure I got many encouraging responses, I only remember one. An outraged woman said she couldn’t believe I would want to squash my child’s voice. This was his form of self-expression and I was going to kill his spirit.

Well, I certainly didn’t want to kill his spirit, but yeah, I wanted to squash—well, tame really—his screaming.

Eventually he grew out of the shrieking phase and into the babbling phase and then the talking phase. But throughout this evolution, one thing didn’t change. The volume.

When Little came along, the pattern repeated itself. Only the second time around, I actually found the shrieking funny. Probably because I knew, like all baby phases, it would pass too soon. And it did. Now we have two loud talking boys who have a lot to say and are always competing to be heard. (And these are some competitive boys.)

So if you happen to walk by our house and hear a lot of yelling, it might just be two really enthusiastic boys having an animated conversation. Then again, it might be one crazed mom who’s trying to reign in her energetic boys and is having trouble controlling THE VOLUME OF HER VOICE.