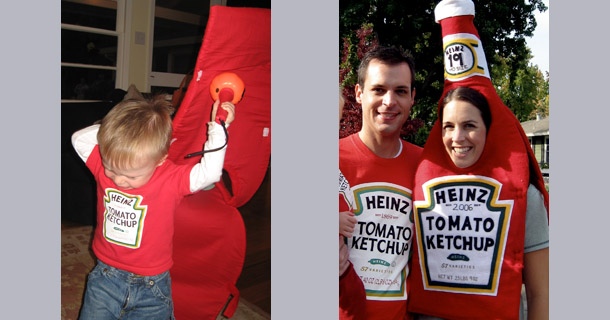 Since having kids, Halloween has made me a bit crazy. (And by “me” I mean me AND Lenny.) I can’t really explain it, but we feel this bizarre need to come up with the perfect costume and we’ll do anything to make it happen. But it turns out, our little characters don’t exactly share our passion for this “kid” holiday.

You’d think that after a hugely successful Old Navy lion costume Big’s first Halloween, we’d be willing to go the store-bought route. But the next year I had an idea…a great idea. And I had accomplices that were willing to make Halloween #2 truly unforgettable.

After all, having a last name like Heinz can make for a lot of questions at the checkout line, jokes among friends and, most importantly, the perfect costume. My mother-in-law—equally in love with my ketchup bottle idea—brought her sewing talents up for a weekend and we got to work. We hit the fabric store, Kinkos (where I photocopied ketchup bottles and blew them up to make the perfect template), measured, remeasured and amazed even ourselves with our brilliance. She headed back to San Diego to finish sewing the body while we worked on the shield from afar.

To say we were carried away would be an understatement. In fact, one morning at 6:30am I got a heartbreaking call from my mother-in-law letting me know they’d packed their cars with their most precious belongings and were evacuating due to the horrible San Diego fires. “But don’t worry, we’ve got the costume!” The costume was safe, and thank goodness, so were they. Phew. Well, many hours (and tears) later, we finished our masterpiece. And Big flat-out refused to wear it. (Except for the 3 seconds it took to get a great picture.)

The next year I felt a bit defeated and, knowing Big wasn’t going to wear my idea of a great costume, I let him wear a football jersey and jeans. He went big for trick-or-treating and threw on an ugly dog costume that we got as a hand-me-down. Fortunately for him, my stomach was bigger than any pumpkin at the patch and I was too tired to care. Well, too tired to do anything about it, at least.

So last year, when Big was set on being a mass-produced Curious George (much to Lenny’s horror), I figured out a way to “save” it. We’d make Little an 11-month-old Man with the Yellow Hat. Fabric dye, fabric paint and brown boots were simple enough. The hat, well, that was another story. One night, close to midnight, I was going at a styrofoam cone with a butcher knife and Lenny begged me to get help (in more ways than one). Our friend Linda came to the rescue and, again, we had the perfect costume.

But it turns out an 11-month-old isn’t so into wearing over-sized hats. (Go figure.) So everywhere we went, people would say, “Oh look, it’s a monkey and a banana!” Fail.

So, yeah, it’s Halloween this week. And I thought this year we might actually bring the ketchup bottle back. Thanks to a Twitter chat (oh yeah, you read that right) with Rookie Moms, I even found the perfect Old Navy hamburger costume to go with it (in case you missed it, my boys love to match). Since we hadn’t figured out whether Little or Big would be the ketchup, I got the hamburger in both sizes. And guess what, now they both want to be hamburgers.

We’ll see what happens come school parade day, Halloween parties and trick or treating. But I think I’ve finally learned that there’s only one thing I really want my boys to wear on Halloween: a smile. So I’ll follow their lead. Even if it is football jerseys and jeans (which is what Little has been wearing almost every day this week anyway).

*Disclaimer- If I have another really good idea next year, all bets are off.