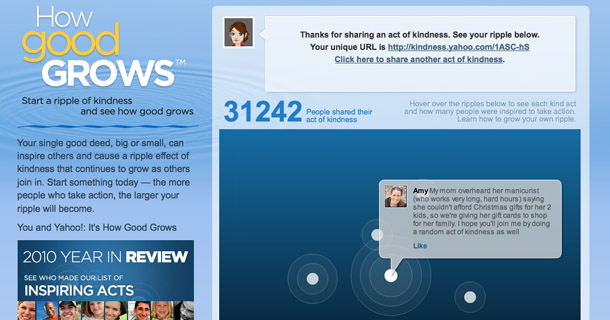 You know how crazy people get around the holidays? Stealing parking spots. Attacking innocent gingerbread men. Hanging and rehanging lights on the house and tree. (Ok, maybe those are just my family, but you know what I mean.)

Well, this year, a bunch of people I know are going crazy. Really crazy. In the best way possible. For the second year in a row, Yahoo! is encouraging people to participate in Ripples of Kindness. (Interesting side note…the program concept was inspired last year by my friend, Carolee, and The 93 Dollar Club.) The idea is that if you randomly do something nice to make someone’s day, that person might just do something for someone else and so on—creating a ripple of happiness during this holiday season.

I’ve been lucky enough to be working with more than 50 Yahoo! Mother Board women as they share their creative ways of making people smile. The stories have been truly heartwarming. From buying wool socks and blankets for a homeless man (literally bringing him to tears), to sneaking around town paying for people’s gas, to drawing cheerful chalk art on neighbors’ sidewalks, to bringing dinner to sick friends…the creativity has been really wonderful.

So when I found out Yahoo! was going to help me start a ripple, I felt the pressure. I wanted to do something creative. Involve the kids. Have a great story. I considered paying for people’s dinner along the I-5 as we drove south for Thanksgiving, but Big’s bladder and Little’s tantrums stole my attention on that 8-hour drive. I considered doing something for the NICU nurses at Stanford—we spent a week there exactly two years ago with Little and it certainly didn’t bring us much holiday cheer at the time. Last year I collected toys for the local Ronald McDonald House…I could do that again.

Then, last week, I was sitting in Starbucks with my mom while we were waiting for my dad to come out of an MRI. While we’ve been blessed with the miracle of good news every scan for 5-1/2 years now, it’s always a nerve-wracking appointment. I was amazed though, because of all the things my mom could have been thinking, she told me about a conversation she’d overheard while getting her nails done. A woman was asking the manicurist what she was going to get her two teenage boys for Christmas. She meekly replied, “Nothing.” The woman, not knowing her background, gave her a hard time saying she had to do something.

Well, my mom, who really listens to people with compassion, knew her story. It’s one of courage, hard work, sacrifice, selflessness and, recently, financial hardship. My mom was saying that she was going to surprise her with a gift card to help her give her boys a Christmas. And I knew this was how I wanted to make my ripple as well. Because even at the times we’re feeling most sorry for ourselves, there’s someone else who’s in even greater need of a little cheer.

If you’re inspired to do something to make someone smile, check out Ripples of Kindness. You can update your Yahoo!, Facebook and Twitter status all at once to encourage others to become a part of your ripple. I promise, it will make you smile too!

Disclosure: Yahoo! gave me $100 to start my ripple, but it doesn’t take a cent to make someone smile. I’m finding other ways to spread cheer as well!