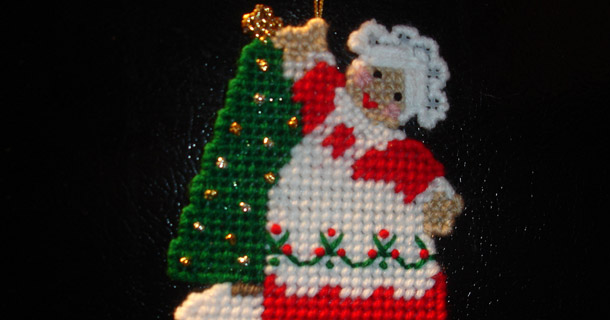 There’s nothing like enjoying the build up to Christmas through the eyes of a 4-year old and 2-year old. Here are a few things our family has discovered this week as we prepare for Santa’s arrival. (I’ll let you decide who’s been naughty or nice…)

Lesson #1: When the most authentic Mrs. Claus you’ve ever seen floats through Safeway winking and waving at your kids, it’s magical. That is, until you realize the only thing she’s buying is a super-sized pack of toilet paper. Then your kids are suddenly in awe of Santa’s bathroom habits rather than his mysterious powers.

Lesson #2: You’re never too young to master the fine art of re-gifting. Santa gave Big a present at school on Thursday and he won’t open it. He said he doesn’t know what’s in there, but since it’s already wrapped, he’ll probably just write someone else’s name on it and put it under the tree.

Lesson #3: Preschool Christmas pageants are bound to be adorable. But, let’s face it, the real show is watching all the over-the-top parents in the audience. (Yes, I definitely count myself among them. Especially this year since I was giddy that Big miraculously decided to be a part of his performance 20 minutes before we were supposed to be there.)

Lesson #4: When you find your kid cleaning the bathroom with your makeup brushes, your wish list suddenly gets longer.

Lesson #5: If you have a 2-year old who’s earned the affectionate nickname “DestructoBaby”, you can bet it’s going to be a superglue kind of Christmas. (Again.)

Here’s to a magical week of wonder, gifts, showstopping moments, wishes come true and you—the parents—being the glue that holds this beautiful season together…even if it is with a little help from that spiked eggnog.