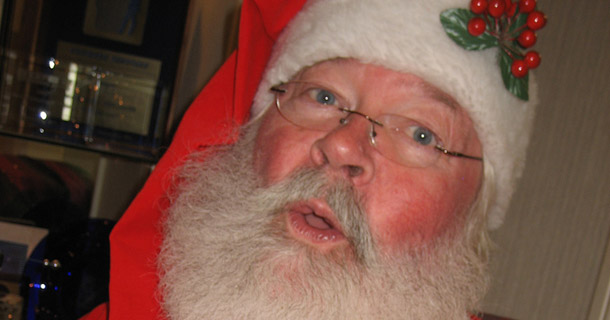 Ah, the Christmas afterglow. New toys to play with, no school (or work, in my case!) and lots of sugary goodies left to enjoy. Honestly, the days after Christmas are almost as magical as the main event, in my opinion. (Yes, even when ¾ of the family is battling a doozy of a head cold.) And I’m not just saying that because of my Christmas faux pas.

Our Christmas was wonderful. Almost the storybook version. Almost.

You see, one of the first things out of Big’s mouth on Christmas morning was a concerned, but gentle, “Oh no. Santa made a mistake.”

This wasn’t one of those bratty I-didn’t-get-everything-on-my-list kind of remarks (those would come later). It was that Santa brought the wrong version of the truck Big wanted.

This sounds like a simple mistake, I realize. Especially given the fact that a) Big finally made his wish list a couple days before Christmas, and b) the elf that helped Santa with this task was a girl, but there really was no excusing this. You see, Big had been sleeping with the Bruder catalog since his birthday in March. He knows every truck in it, as well as their features. He wants them all, but knew that he’d only get one for Christmas, so he had to make it good. This was the gift. The one he’d been talking about for months (and months). And I got it wrong.

Fortunately there were other gifts (lots and lots of them, including Little’s top wish, candy) to distract the kids for awhile so Lenny and I could figure out SantaGate 2010. We could leave a note from our Elf on a Shelf that night saying Santa had accidentally left another kid’s gift and his would be coming soon. But who knows how long it would take us to track down and ship the right truck? We could suck it up and buy both. Yeah, that’s just what we needed…

But while we were fretting, our little Christmas angel had made peace with Santa’s blunder. He kept saying, “It’s ok that Santa made a mistake. I still really want this truck.”

Lenny and I realized that this truck would be well loved, so we let go (after combing through the catalog to see where I went wrong) and followed Big’s lead. We forgave Santa and decided to focus on the good stuff that came with Christmas morning. Because, like the truck, there was an abundance of fun to enjoy.

No doubt Santa and I will make lots more mistakes in the years to come, but hopefully we both learned our lesson. Santa will ask for all the details in the future—maybe even a picture. As for me, well, I’ll try to forgive myself as easily as Big forgave Santa.