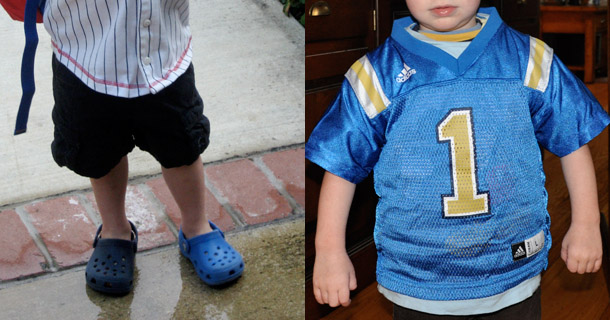 I look back at pictures of myself as a child—you know, the ones where I’m decked out in a beautifully smocked dress, sitting angelically beside my perfectly coordinated brother—and then I look at my kids and wonder where I went wrong.

Since about the age of two, both of my boys have been extremely opinionated about what they wear. And, let’s just say, mainstream isn’t their thing. Sure, I’m the one who buys the clothes (ok, Lenny is, but I usually chime in), but I try to give them the freedom to decide what they wear each day. (Hmm…maybe this is where I went wrong.)

Through the years, we’ve gone through many phases in our house.

First Big decided that mismatched shoes were his thing. For an entire spring/summer he wore one bright blue and one navy blue Crock (which were often accessorized with a train conductor’s hat—worn backwards). As the weather changed, he moved to one plaid and one solid slip on. Everywhere we went people would ask if I realized he was wearing one wrong shoe. Everywhere we went, I was well aware. But honestly, I thought it was pretty funny and a battle worth letting him win. After all, self-expression was something I wanted to embrace early on.

Soon after Little was born, the matching madness began. The clothes didn’t need to be exactly the same, but if Little’s onesie had an animal on it, Big wanted a shirt with an animal on it. If Little was wearing cargo pants, Big wanted them too. Eventually we started buying some matching clothes to simplify the whole exhausting process. (I humbly acknowledge that this phase was more about control than self-expression—ok maybe they all are—but I was sleep deprived, and again it was a battle I was willing to let him win.)

The day Little discovered that he had an opinion about clothing, the matching phase came to a halt. Now Big will only wear athletic pants (my fancy way of saying sweats) and Little refuses to wear them. He’s become partial to brown pants. (He’ll tolerate khakis as a fallback if all the browns are dirty. You may ask why he has three pairs of brown pants and all I can say is I wonder too…)

Before Christmas, Little became so opinionated about what shirt he wanted to wear, he was paralyzed in the morning making a decision. Sure, we tried the whole, “Here are your options, which one do you want?” We failed. But on Christmas Eve, he solved his own problem. If he couldn’t decide which one to wear, he’d wear them all. That day he wore eleven shirts. Not only was it hilarious, I got to thinking he might have a future as a Gap model since those poor little things are done up in so many layers they couldn’t run away from the photographer if they tried. (So far, nobody’s stopped me on the street with a modeling contract, but that’s only because now I only let him wear three—ok, four—shirts on any given day.)

I can’t help but look at our Christmas Eve pictures—with Little looking like a 3-foot-tall linebacker and Big wearing his shirt backwards for some bizarre reason—and have mixed feelings. On the one hand, I love that my boys feel confident in embracing their own style, in being different. (I also appreciate the comedic value they added to the day in their crazy get-ups.) But part of me longs for the beautiful family shot (heck, any family shot) in front of the tree in our Christmas bests—which, in my fantasy, don’t include drawstrings or jerseys.

When I feel that way, I find comfort in knowing that while we may not have captured a frame-worthy picture, we’ll always look back on this season—and what’s likely to be a short-lived phase—with laughter and fond memories.

Do you let your kids pick out their own clothes? Are there things your kids love/hate to wear? Are you one of those families that captures the perfect shot in subtle, but stunningly coordinated outfits (and what’s your secret)? Do you look at kids like mine in the grocery store and consider pulling the mom aside for an intervention? (Go ahead, be honest.)