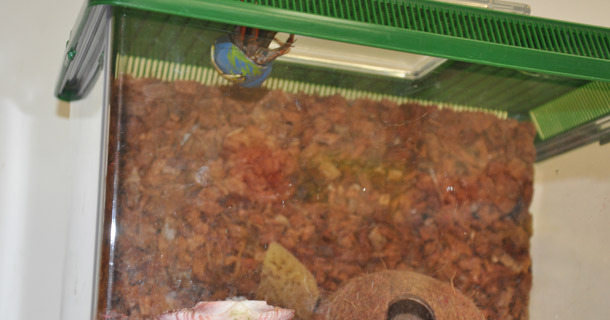 As far as I see it, there are a few types of people. Baby/kid lovers. Animal lovers. And the truly remarkable people who have enough goodness in their heart to be both. I fall into the first category. It’s not that I don’t like animals (especially in pictures). It’s just that, quite honestly, they scare me (or make me sneeze). Let me explain before you judge and swear you’ll never read my blog again…

When I was in elementary school, my parents bravely/ignorantly/lovingly bought me a hamster. Panda. The thing—yes, thing—was possessed. She bit anything that came near her. Even animal lovers. We got so desperate we sent her away for a week to be trained by a friend who we deemed the hamster whisperer. He concluded there wasn’t much hope, Panda was Cujo in rodent form.

So for a couple years we wore ski gloves or put the exercise ball up to the door to let her out to roam free. She’d spend most of her time in the glorious exercise ball chewing her way out (once so successfully she escaped for hours, but her chewing on something in my brother’s room gave her up). Then one day, Panda found a cozy spot in the corner of her cage and snuggled up for good. My parents tried to explain that she was dead. I told them she was just in a coma—she was moving. To this day, they claim it was me breathing on her. To this day, I claim we buried her alive. I cried for days. Why? Beats me. Maybe guilt that I couldn’t tame her. Maybe relief that the nightmare was over. Either way, my fate was sealed. I’d never be an animal person. (Except for an Easter season in high school when I had two pet ducks. But I’ll spare you that messy story.)

Knowing my fear of animals, I’ve worked very hard to be sure that my kids love animals. They can’t get enough of their grandparents’ or our neighborhood dogs. They love talking to my grandmother about her African safari. Little’s list of favorite animals includes creatures I didn’t know existed until he came along. I’ve succeeded (well, at least I haven’t ruined my kids…yet).

But then we got our first pet. And by “got” I mean we were gifted a pet we honestly weren’t quite prepared for.

Little’s cousins gave him a hermit crab for his 2nd birthday in November. He named him Spiderman and loved watching him do pretty much nothing in his cage. Since hermit crabs are nocturnal, we’d catch a glimpse of action every few days, but that was about it. Most of the time he’d just hide under a coconut shell. For a week, Spiderman lived in Little’s room. When it started to smell, we moved the cage to the playroom and he became the talk of every playdate. For about 2 minutes.

Well let me tell you how much 2-year olds (and their 4-year-old brothers) enjoy cleaning cages and feeding pets. About as much as their animal-phobic, smell-sensitive pregnant moms. So it wasn’t really on purpose, but Spiderman became a bit neglected. Lenny and I would realize he’d been forgotten for a week and we’d be in awe of his perseverance when we found him in a different spot in the cage. One day I was sure he was a goner and the next thing I knew, he was clinging to the top of the cage—living up to his valiant name. Big yelled, “Mommy, he’s trying to get out!” I don’t think he was far off. And none of us were thrilled about that.

Well, it’s a few weeks later and Spiderman, like Panda, has finally found a corner of his cage to snuggle up for the last time. (For real…I think.) Big said the other day that the crab was doing great. Like me, he’s in denial. Little hasn’t looked at or mentioned the crab in weeks.

So now, the parental dilemma. Do we explain what happened to Spiderman and use this as a life lesson? (Please note, Big cried for a week when we got rid of our Christmas tree, so this won’t be easy on anybody.) Or do we quietly say goodbye to Spiderman while the boys are sleeping (like all the toys we just gave to kids at our local shelter)?

Either way, I hope and pray that this first pet experience doesn’t leave my kids scarred like me, but that it’s the beginning of a lot of loving relationships through the years.

Do you have fears you worry about passing on to your kids? How do you ensure they have a different experience then you did?