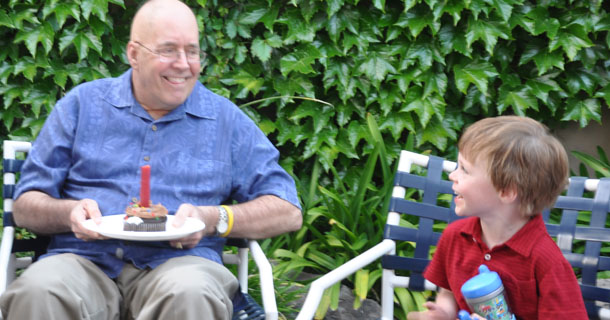 The other day we were driving by Big’s soon-to-be elementary school—which happens to be two stories—and he asked me if there was an elevator. I quickly responded, “No, just stairs.” He corrected me (of course), first saying that there was probably a cool ladder instead, then by asking, “Well, what about people who can’t walk up the stairs?” I told him he was right, there was most definitely an elevator for people who aren’t able to walk up stairs.

This only piqued his interest. He started asking me how people in wheelchairs get into cars. He was so sincerely interested and concerned. As we talked about it, he kept saying, “Cool!”

It got me thinking that while I’ve been pretty wrapped up in feeling sorry for myself and my family lately due to my dad’s disabilities and setbacks since being diagnosed with brain cancer 6 years ago (he’s often in a wheelchair or using a walker), my kids are learning wonderful lessons in empathy—and life—spending time with their grandpa.

It’s true, I absolutely hate that Big thinks watching my dad walk a few yards unaided is cause for celebration. But I absolutely love that he cheers for him and feels pride watching his grandpa succeed.

I absolutely hate that Big locates things around my parents’ town in relationship to where the hospital is. But I absolutely love that he begged to visit his grandpa last time he was in there, even though it was a bit scary.

I absolutely hate that every time Big sees a fire truck, he thinks someone has fallen and needs help. But I absolutely love that he knows there are such things as real-life heroes, and that it’s ok to ask for help.

I absolutely hate that Big assumes his grandpa will be asleep whenever we call or go over to see him. But I absolutely love that he still insists on calling and considers it a Friday adventure to go spend time with Nana and Grandpa (then asks to go back on Saturday too!).

I absolutely hate that when Big sees pictures of himself as a baby with my dad he shouts, “There’s Grandpa before he got his brain ouchie!” (Especially because it wasn’t…but it was before a number of other setbacks that have impacted his strength and appearance.) But I absolutely love that he’s had years to bond, giggle and feel truly adored, in spite of my dad’s declining health.

I absolutely hate that even Little is beginning to get frustrated by being called the wrong name time and time again (then again, that may be because I do it too). But I absolutely love that the boys continue to remind their grandpa that he got it wrong—because they haven’t given up hope that he’ll remember next time.

I absolutely hate that Big’s growing vocabulary includes words like cancer and heart attack. But I absolutely love that when it comes to my friend’s son with leukemia, rather than being squeamish, Big sports a shirt with his picture and tells people his friend is sick, but he’s fighting to get better.

No doubt my kids will be awkwardly uncomfortable and say the wrong thing around someone who’s different at some point along the way. But for the most part, Big doesn’t seem to care if someone has purple hair—or no hair at all for that matter. It’s not to say that he doesn’t notice, he just doesn’t think it’s a reason to fear or judge people.

There’s so much that I hate about my dad’s situation. I hate that my kids won’t learn how to serve a tennis ball, soak up sun while mowing the lawn, run a 10k, do a flip on a trampoline (or off a high dive) or make a mean batch of chocolate chip cookies from the master. But I can’t help but love the lessons they are learning from their grandpa. And I hope they always remember how he shaped their outlook on life in so many wonderful ways. I know I will.