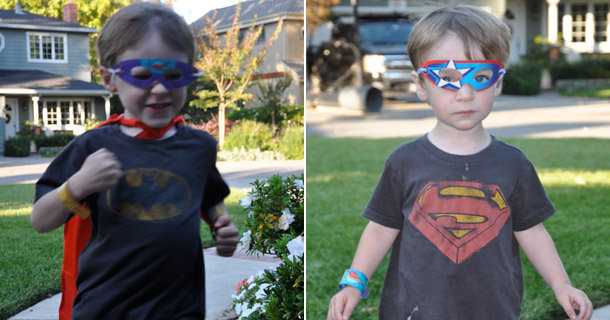 I love a good party. And while a warehouse full of blow-up slides and hand sanitizer is all my little guys need to be in heaven (and about all I can handle at this point), Big recently went to a party that was so creative I had to share. (Especially given my boys’ growing obsession with superheroes.) Sorry, I forgot my camera, so you’ll have to use your super powered imaginations…

Come party day, all the guests arrived a bit timid, but these 3- through 5-year olds were busy in no time. The kids sat around a table and, with an adult’s help, went through the Superhero Starter Kit to create their own persona for the day. Once all the superheroes were named, masked and caped, the challenges began.

Challenge #1: Pop the Poisonous Orbs
What’s more fun than a Spiderman jumpy house? A Spiderman jumpy house filled with balloons that the superheroes have to jump on to pop. Who knew saving the world could be so hilarious? (And loud…so if you have a sensitive one, be warned.)

Challenge #2: Get Caught Up in the Spiderweb
Everybody ran to a section of the yard to discover a huge spiderweb wrapped throughout the bushes made of string. Well, a bunch of strings, actually. Each kid had to find their name at the end of a string. Then they followed their string, wrapping it as they went until they found the end. At the end was a bag that included the super power they’d need to conquer the next challenge.

Challenge #3: Blast the Bad Guy
Inside that bag was the real magic: silly string. The kids all got to unleash their can on the birthday boy’s dad who appeared wearing a mask of the villain. (Excuse my lack of superhero knowledge here…I don’t remember who he was.) I should note this was outside…and it was messy. But it was definitely the perfect ending to a fun adventure—for both the kids and the adults. Well, maybe with the exception of the birthday boy’s dad who’s probably still washing the silly string out of his hair.
Warning: You will never go to another store with silly string without being begged to repeat this activity.

At this party, they really went all out. They even took a break mid-challenge to spend time with some real-life superheroes. Yep, the local firemen stopped by for some fun. They not only let the kids check out the truck, they gave each kid a turn to knock down cones in the street using the fire hose. (As a bonus, their mere presence gave the moms a thrill too.)

You know it’s a good party when, months later, my boys are still completely obsessed with playing superheroes and wearing the fun masks. Since Big is the only one with a cape from the party, I went on the hunt for dress up gear. I found these great personalized—and inexpensive—superhero accessories from BabyPop that are sure to be a hit in their Easter baskets. After all, they need to look good saving the world!

Superheros aren’t your thing? Check out some inspiring ideas from my friends at Tin Parade: classic baseball party, StarWars party, classic train party and more. And my friends at Santa Barbara Gift Baskets have amazing taste too…just look at this Ice Cream Social party (be sure to check out all the pics)!

Have you been to a great themed party? Please share!