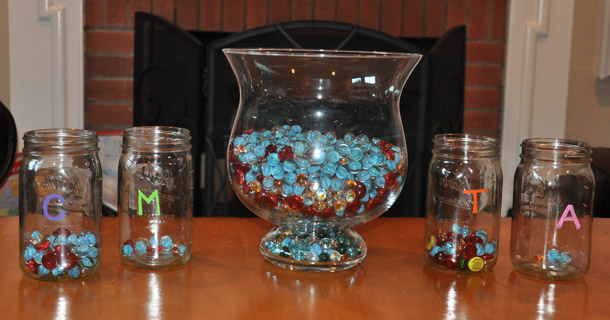 I recently fessed up that my discipline methods could use a bit of work (ok, a lot of work). And a couple of my blogging friends had shared their experience with gem jars, so I decided to give them a go. Well, we’re a couple weeks in and I figured I’d share what’s worked and what hasn’t since a lot of people asked me about it.

Gem jars are all about positive reinforcement for good behavior. The idea is that everyone in the family tries to “catch” other people doing good things. When they do, they say, “I think so-and-so deserves a gem because…” The goal is to fill the jar with evidence of great moments and, yes, get a reward of some sort. In our house, we’ve also had to take gems away due to some negative behaviors we’re trying to change.

Step 1: Gem Prep
• Hit Michael’s or another craft store to get jars and gems for each family member.

Step 2: Family Meeting
• Sit down together and introduce the idea. Explain that you’ll be playing a new game trying to catch people doing good things.
• Explain that each family member—even mom and dad—will have a jar to fill with gems.
• Work together to make a list of great behaviors that will earn gems (e.g. helping others, using manners, cleaning up, etc.). Of course this list can always grow.
• If you’re going to take gems away, make a list of behaviors that will lead to gem removal (e.g. hitting, sassy talk, whining, etc.).
• Think of rewards together (e.g. a trip to the zoo, a special day with mom or dad, a coveted toy, etc.). Since my kids are young and need more immediate gratification, I made lines up the side of the jar at each inch and they get small rewards along the way (e.g. chew gum, choose the music in the car, etc.).
• Explain you do not get a gem if you call out your own good behavior or ask for one. This is key…believe me!

Step 3: Play Catch
• Start noticing the great things your kids and spouse are doing. And hope that they return the favor!

So a couple weeks in, here’s what’s working for us. And what’s not.

What’s Working:
• The boys are trying really hard to work together and help out.
• I can see their chests puff with pride when we point out their positive behaviors.
• Though I hate to use the negative spin, the threat of losing a gem often gets them to rethink bad choices.

What’s Not Working:
• The boys are very rarely calling out other people’s positive behaviors. I think they may be a bit young for this. When I remind them that they can catch me doing good things, they say they know, but the only thing Big has said is, “You don’t have many gems because all you do is yell at us and tell us to remove gems.” (Ahem, obviously not the case if you look at their jars compared to mine.)
• Little doesn’t understand why they don’t both get rewarded at the exact same time. I think he’s a bit young to grasp this.
• Honestly, I’ve been a bit inconsistent and I don’t think I’m helping them fill them fast enough, so the light at the end of the tunnel is too far away.

What do you think? Would you do this in your house? How do you feel about positive reinforcement/rewards?