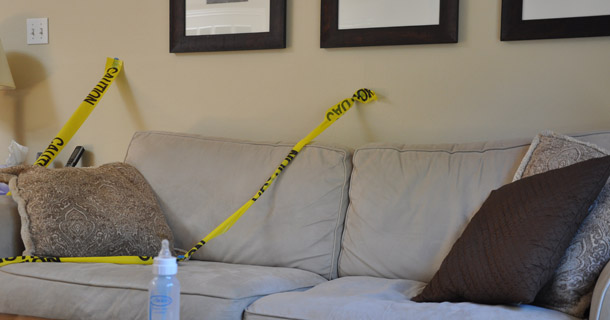 Lesson #1: Checking pockets is a key piece of laundry success. The mini-tomato collection I found in Little’s shorts was a near disaster.

Lesson #2: Driving an inappropriately small car for a family of five—with tinted windows—has its perks. I’m assuming the twenty-something guy who flashed me a flirty smile at the gas station had no idea there were three kids screaming in the backseat.

Lesson #3: You know you’ve watched the National Geographic Kids creature videos too much when you tell your little ones they might play some Beatles at the concert in the park and your son replies, “The kind who roll in poop? I love those ones!”

Lesson #4: Speaking of poop (and we do in our house a lot these days), little boys may enjoy discussing it, but they really don’t like getting it on them. Or near them. (See photo for Big’s most recent response to Pink’s blowout. Which, unfortunately, occurred when he was holding her. But, fortunately, only got on the couch and pillow.)

Lesson #5: Speaking of the concert in the park, I’ve learned that while my life couldn’t be more different than it was right after college, my theme song hasn’t changed. As we were about to head to the concert, the boys came out dressed in pjs. Big decided it would be best to listen to the concert parked across the street. I decided that wasn’t such a bad idea. Big decided he’d like to go home after a few beats of the first song. I decided we were staying put. Pink decided she didn’t like being in a parked car and started to scream. I decided we’d made the effort, we still weren’t going home. So as I drove in circles around the parking lot across the street, it was only appropriate that the band sang Jimmy Eat World’s The Middle. “It just takes some time, little girl you’re in the middle of the ride. Everything, everything will be just fine. Everything, everything will be alright, alright.” I broke into hysterical laughter realizing how ridiculous this whole thing was, and we all giggled our way home. After just two short, but meaningful songs.

Lesson #6: There are some friends who you don’t see or talk to often enough, but if it weren’t for the extra baby and much bigger kids who are around since the last time you were together, you wouldn’t know a day had passed.

Lesson #7: When your two-year old tells you he’s going to “Kick your butt”, you think you’re going to do just that to the monsterous kid at the park (whose mother obviously doesn’t love him) that he must have learned this phrase from. That is, until Jillian Michaels says it to you—just like she did yesterday—with your little sponge looking on.

Lesson #8: It’s so easy for me to forget that Little is really just that: little. He spends so much time chasing after the big kids that I too often think of him as one. From now on I’m going to embrace the tiny bit of baby left in him, because it will be gone before I know it.

Lesson #9: It doesn’t take much to change things up and give your kids a thrill. We called Saturday backwards day and had cookies for breakfast, pasta for lunch, sandwiches for dinner and cereal for dessert. (And while it was tempting to have wine at 9am, I decided to stick with coffee.)

Lesson #10: I have the most wonderful friends and readers around. (Ok, I knew that, but you reminded me.) When I discovered I’d been nominated for the Circle of Moms Best of the Bay Area Mom Blogs, you guys came out to vote en force and I shot up to the top three within a day. Now, if I could just thank the person who nominated me… I’d love to know who you are! Oh, and don’t forget, you can vote once a day, so keep those clicks coming!

May you have a giggly, mess-free week. (And lots of free time to cast your vote each day.)