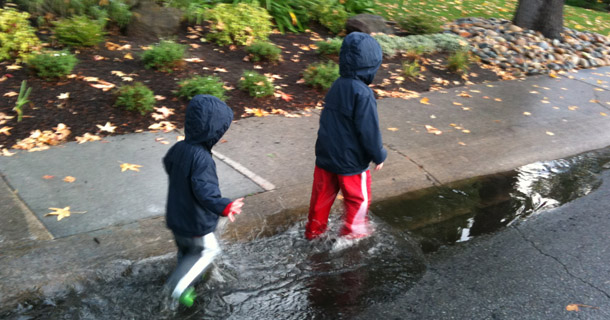 Boys will be boys.

It’s a phrase you can’t help but hear all the time as a mom of young kids. It’s used when laughing about mud-covered faces. It’s said to explain away a surprisingly loud crash in the playroom. But lately I find it’s uttered all too often to excuse mean, aggressive behavior.

For instance, the other day I took my kids to our local baby pool. Two young boys were grabbing my kids’ diving toys and taunting them. Really taunting them. Rather than reprimanding her boys, the mother gave me a knowing look and shrugged as if to say, “You have boys, you understand.” And I do.

I love being a mom of boys. But boys get feisty. (I’ve got a (more) crooked nose and Lenny’s got the chipped tooth to prove it.) And moms get tired. (I’ve got the dark circles to prove it.) But as parents, I think it’s up to us to channel that boyish energy into positive outlets. It’s our job to take these excitable little boys and raise them into respectable—and respectful—young men. Because, let’s face it, while a bad boy is intriguing, a good guy is who we want our daughters to marry and our grandkids (gulp!) to look up to.

So because boys will be men, I promise I will do everything I can to teach my sons:

• Trust is like the greatest of all Magna-Tile towers. It takes time and effort to build, but mere seconds to destroy.

• Superheroes don’t get their power from their muscles alone, but from their intentions.

• There are few things as rewarding as a sense of humor when it’s used to laugh with people, not at them.

• Just because you can, doesn’t mean you should.

• When chosen carefully, words can be far more powerful than fists, sticks and, yes, even light sabers.

• Get your hands dirty and your dishes/clothes/rooms clean.

• Use curiosity to get into things and creativity to get out of them. (Yep, just like George.)

• Princesses don’t need a prince to save them, but to dance with them.

No doubt my boys will break a few valuables, bones and maybe even hearts along the way. But if I can help it—and I believe I can—it won’t be because they didn’t know better.

What values do you want to be sure you instill in your kids?