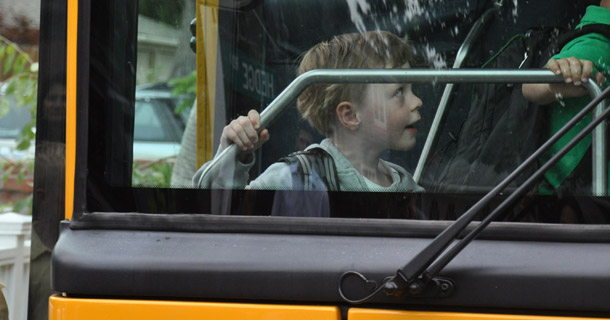 For the past five plus years, I’ve spent each day looking out for things that might cause Big to totally lose it. And avoiding them—or at least doing my very best to soften the blows. Being sure I had the right socks that didn’t get all bunchy in the tennis shoes I forced him to wear to the park. Talking louder when I saw the panic in his eyes as Puff the Magic Dragon played one day at preschool. Taking pictures of him with the Christmas tree, old shoes or anything else he was having trouble saying goodbye to. He’s a sensitive soul. And I’ve been waiting for the storm to break come the first day of kindergarten.

But it didn’t. He was cool, calm and totally unlike himself.

It started with me asking if I could take a picture (in last year’s pics his puffy eyes were more red than his shirt). He said of course. I reminded him that last year he wasn’t so sure, so I just thought I’d ask. He said last year he was always saying he didn’t want to go to school, but then when he’d go, it was fun. Now he knows better.

And it’s true, he does. He’s matured tremendously the past few months. He’s shown nothing but excitement about kindergarten starting. And while I give him huge, huge credit for taking the bus to and from all-day kindergarten and loving every minute of it, I have to think that I did a few things (completely unintentionally) along the way to help make this day so wonderful.

I forgot about the summer worksheets his preschool teacher sent home. I came across them last week, swore at myself, and asked Big if he wanted to do them. He picked a couple he liked and seemed excited about getting to work. If I’d remembered I had the monster stack, I might have pushed him to do them all…and made him a bit more nervous about the academics to come.

Instead we practiced recess. I’m much more comfortable in a structured environment—and Big is too. I had no doubt he would do whatever the teacher asked of him. It was unstructured part of the day I knew would be the hardest. Luckily a lovely mother planned some meet ups at the kindergarten playground, and we went on our own a few times too. He knew the lay of the land, had time to master the monkey bars and could find all his buddies doing their favorite things.

I let him break the rules. While I love that Big is such a good listener, when I see him pushing limits, I know it means he’s comfortable. This summer I was often too tired to fight him and would watch as he tested me—or authority in general. Of course I’d talk to him about his actions in a calm setting afterwards, and I’m hoping—really hoping—it will help him make smarter choices when he’s off being all grown up and stuff.

I kept him up (a tiny bit) late partying the night before school started. Some friends got together to BBQ and play in celebration of the last night of summer, so of course we joined the fun. Instead of sitting at home organizing and fretting about tomorrow, we were laughing and living in the moment. And by the time Big went to bed, he was exhausted and asleep in no time.

I woke him up early to watch cartoons before school. Routine is a must for this kid, so I tried to make this morning just like any other. Instead of letting him sleep in (until, you know, 6:15am) and rushing him out the door, I woke him up and turned on the TV for his usual morning show and cuddle with Pink. By the time we got to the bus stop, he was wide awake and ready to take on the world. Well, the kindergarten playground, at least.

And what did he think of his first day of school? “Best. Day. Ever.” Me? Well, it wasn’t so bad after all. And I have my summer slacking to thank for that.

How was your little one’s first day? I’d love to hear your sweet, funny and sentimental moments.