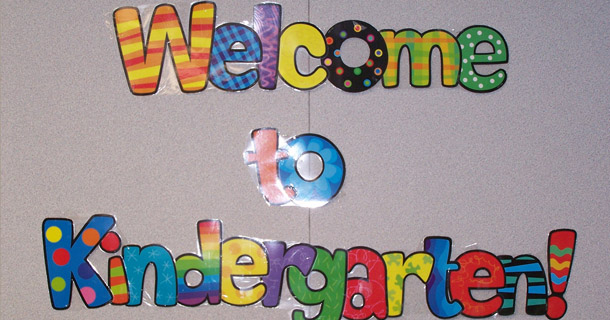 Sure, I already know that five pennies equals a nickle, but that doesn’t mean I didn’t learn as much as Big did this very first week of college prep.

Lesson #1: I’m already embarrassing. When I ran to meet Big as his bus arrived at school the first morning (you didn’t think I just waved goodbye and went home, did you?), he took note that his other buddies’ moms weren’t there (though they were, they just didn’t run as fast as I did), and he said, “Um, can you leave now? Iloveyoubye.”

Lesson #2: Carpooling is not driving your car to the pool. And a yard duty is like a park ranger, only instead of picking up after you, he makes you clean up your own stuff.

Lesson #3: Bullies don’t need a ramping-up period. Big’s already been knocked down (for no apparent reason) on the playground. Good news is he just got back up and told his friend who empathized. He also told me that kid obviously didn’t know that it wasn’t nice to treat people like that. (Watch out kid in the Cal shirt, Big’s mom isn’t as sweet as he is…)

Lesson #4: The playground is also a new place to explore the world of boyish fun and bad guys. And, like only a little foodie could, Big came home pretending to shoot frosting out of his imaginary gun.

Lesson #5: While we, as parents, spend time encouraging our kids to go to school and make new friends, we don’t always heed our own advice. When I arrived at Back-to-School Night a bit early, at each of the lunch tables outside the classrooms there was one parent—sitting alone, staring at their phones.

Lesson #6: A CD of ocean sounds isn’t calming to two little boys who need a good night’s sleep. It’s hysterical. Apparently in their world it sounds like a toilet flushing.

Lesson #7: After a week of constant crying (him and me) and not eating (only him), it takes a $15 copay and hauling three kids to the doctor’s for an hour to get an official diagnosis. Are you ready for this? Little is a 2-year-old middle child. (Who happens to be depressed that his big brother started kindergarten.) And there’s no cure. (Though the doc seemed hopeful that preschool will help.)

Lesson #8: Note to self: Before Little goes off to kindergarten, be sure to work with him on a list of things he might enjoy journaling about. You know, one that makes me look better than Big’s first entry: “I love watching TV.”

While I probably could have come up with 10 lessons, the TV is calling. (Ah, how I love fall.) Hope your back-to-school season has been full of fun and new knowledge!