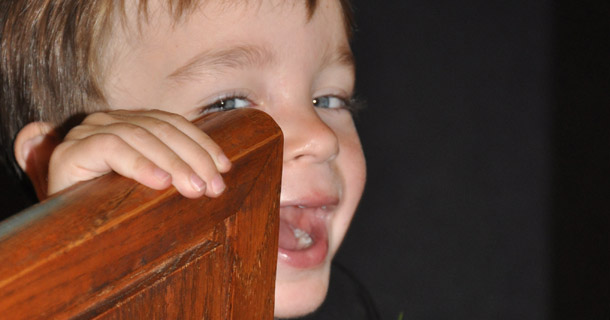 Today I’ll be sending Little off to his first day of preschool. This isn’t new. I’ve been through a first day of preschool before. It wasn’t pretty. Big was painfully shy, a quiet observer of the world around him. He also happened to be in a class full of rowdy—really rowdy—boys. Boys who, from the first day, were running through the class playing superhero and bad guys. Boys who were shooting pretend guns and using words that made my skin crawl. Both Big and I spent the year wide eyed and on edge around his peers.

Big wasn’t like those boys. He did exactly what the teachers told him to, and I played proud mama (of course I had raised my son right). My boy was the teacher’s pet. Well, at the very least, he wasn’t the teacher’s nightmare. I would ask myself, who were these unfathomably unruly boys?

Now I know. They were Little.

Yes, on this first day of preschool, I find myself filled with a different kind of nerves. I have no doubt Little will quickly make friends and take heart-stopping leaps from the play structure (the school administrator thought it was funny that I noted his love of jumping on his personality profile…I don’t think she’ll be laughing for long).

It’s the following the rules thing that has me a bit concerned. Don’t get me wrong, he’s a sweet boy. He uses better manners than many adults and is good hearted. (For instance, he quickly apologizes to Pink after hitting her in the face with her own fist.) But he loves to make people laugh. Since before he could talk, he’s been our family’s class clown.

Oh, I love that he loves to make people laugh. But I’m not sure his teacher will. (Especially since he’s figured out a way to pronounce her name so that it has the word “butt” in it.)

Knowing full well this day would be coming, I’ve been doing my best to prepare him. I’ve talked to him about sitting quietly (without making explosion sounds). I’ve discouraged him from sticking his food (and finger) up his nose. I’ve rehashed that markers write on paper only (not desks, dolls or body parts covered by diapers). I’ve tried to quickly right my wrong of overusing reverse psychology so that he knows “don’t” do something really means don’t do it (and certainly don’t laugh in someone’s face when you do). But most importantly, I’ve tried to explain that drawstrings aren’t meant to be pulled. And since it’s a religious school, I’ve even sent up a few prayers that if anything sticks, it’s this one. Because I certainly don’t want Little giving the class two reasons to use “butt” when referring to their sweet new preschool teacher.

No doubt we’re in for an adventure, a few notes home from the teacher and a whole lot of laughs this year. (Which, of course, I can’t wait to share.)