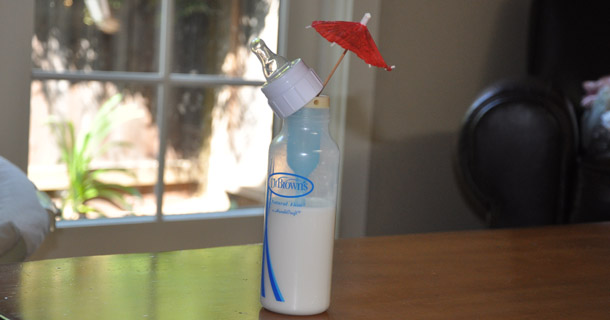 When I was pregnant and highly emotional (unlike how I’m totally level headed now), I saw a commercial that had me up in arms. It compared the risk of a very pregnant woman carelessly getting tossed off a mechanical bull to not breastfeeding exclusively for the first six months. Don’t get me wrong, I love some good hyperbole to make a point—especially in an ad concept—but this was just plain insulting rather than insightful.

For months I’ve stewed…trying to wrap my head around the perfect self-righteous response. Because—get ready for it—I don’t breastfeed. Don’t, can’t, it’s all the same when people’s smiles turn into awkward questioning looks as you pull out the bottle, toss in some formula and start shake-shake-shaking.

I figured I’d rehash my heart-wrenching story of feeding Big from a syringe so he wouldn’t grow attached to a silicon nipple instead of a piece of pumped-raw flesh. Or talk about the fact that Little landed in the NICU at 10 days old thanks to my inability to deliver those glorious antibodies. Or maybe I’d discuss the 13 nurses and lactation consultants who told me that since I made colostrum—and Pink seemed to be thriving at 26-hours old—that this time would be different. (But…was I sure I hadn’t had a breast reduction along the way? After all, there must be some explanation for my dysfunctional ducts and, at a glance, that seemed like a reasonable question.)

I stewed. Because that’s what I do. Heck, I’m a human crockpot.

Then, a couple weeks ago, I was at the park and I got knocked right off of my high horse (which, luckily, isn’t nearly as dangerous when you’re not pregnant). Because, while I truly am pro-breastfeeding (nurse on, I say, nurse on!), I found myself a little bit horrified by a woman who was doing just that.

It wasn’t the public feeding that caught me off guard. It was her unabashed toplessness, especially in light of the fact that her baby was nowhere within feeding range. Of course it was nothing I hadn’t seen before (though these suckers—yes, pun intended—were straight out of a very R-rated movie). But, honestly, it wasn’t something my little boys had seen before. (Not because we’re especially modest (have I mentioned we only have one bathroom?!…and, yes, I did attempt to nurse in front of them), but let’s just say no nurse ever thought my problem stemmed from augmentation surgery.) And while there’s nothing sexual about breastfeeding, little boys who are learning about private parts know certain things tend to be covered for a reason. When they’re not, they take notice (and enjoy announcing it).

At first glance, I laughed. Out loud. Honestly, seeing a topless woman at the park is kinda funny—it was just so out of context. Next, I realized how lucky I was that Big had started kindergarten that week. Lastly, I quickly looked around to be sure Little wasn’t seeing what I was. Knowing him, there was no telling how he’d respond. (Especially because when he sees men running/swimming/gardening without shirts on, he points and yells, “He’s naked!”)

I considered going over to her and asking if she’d heard of the wonderfully fashionable “Hooter Hider”. Then I realized that when it comes to nursing—or not nursing—people really should do what makes them comfortable. Even if it makes other people a little uncomfortable.

So, my apologies to those of you who see me making a bottle of formula and blush. I’m just doing what I’ve gotta do to help my baby thrive.