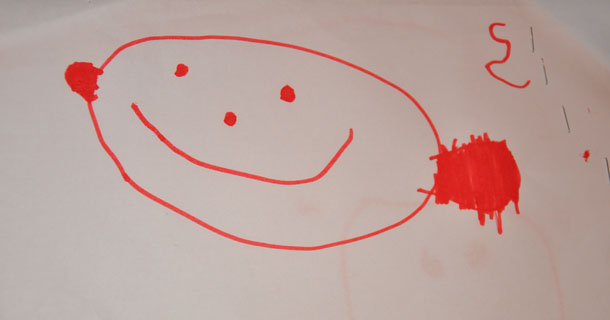 Lesson #1: When your kindergartener comes home from school telling you he worked on his Facebook, it’s a relief to discover he’s far more literal than virtual. (At least for now.)

Lesson #2: Technology still has a long way to go, if you ask kids anyway. Big, questioning how smart phones can really be asked, “Does it know how to cook dinner? I’d like a phone that does that.” Wouldn’t we all.

Lesson #3: (Speaking of smart phones…) Move over you crazed screaming birds, there’s an alligator that needs a shower. And, unlike me, my kids give him lots and lots of time to get cleaned up. (Maybe I should start asking the same thing… Where’s My Water?)

Lesson #4: And equally entertaining to little boys? A 6-month old (I know! How on earth did that happen?!) playing with a half used package of wipes. That shocking crinkle…and the bang when she “throws” it to the floor? Funniest thing ever. And cheap.

Lesson #6: For those times we’re not on our game, I need a laugh track. That way I’d be more likely to remember that most of what my kids do is actually pretty funny. And it might remind them that I’m a bit of a comedic genius myself.

Lesson #7: Then again, when your preschooler is honestly confused that your belly can be so big and not have a baby in it, it’s time to rethink your choices. Like sometimes you should just stop at one. (One kid, that is.)

Lesson #8: If your eyes really got “stuck that way”, then based on my observations of Pink, all thumb suckers would also be cross-eyed.

Lesson #9: Now I know why I’ve never been a baby overalls kind of gal. I decided to try some on Pink this week. Even sassed them up with some heart-covered Mary Janes and a flower bow in her hair. But as soon as I came out, the boys started laughing hysterically saying, “She looks like a farmer!” A cute farmer, but yeah. A farmer.

Lesson #10: Be very clear with your 2-year old about what you’re giving him to drink at a party. Because people kinda look at you funny when he polishes off his sparkling cider with an “ahh!” and raises his glass asking for more beer.

Cheers to you and yours! May you enjoy a laugh, a drink and a shower or two along the way.