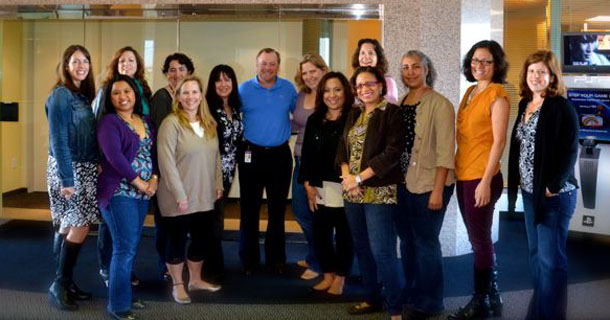 “Flawless.” That’s what it said I am. I think the last time someone called me flawless was my freshman year of high school. And it wasn’t me that was flawless, it was my geometry proofs. (Nerd alert!) So while I may have been a bit unsure about diving into the world of video games, all it took was one game of Everybody Dance—set on Beginner level—telling me I’m flawless, of course, and I was swooning.

You see, recently I was invited to join about 15 other bloggers in a group that Sony is launching—PlayStation Family. I got to spend time with these extremely tech-savvy women at PlayStation Headquarters on Monday where we learned more about their products and got a peek behind the scenes. Oh, and did I mention we ate a lot and played video games (including the one that compliments you)?

The day started with a conversation. Not just among the ladies, but with the CEO, Jack Tretton. Pretty cool, right? Having been on the corporate side of an event like this, I was extremely impressed that he didn’t talk at us, he spoke with us. Freely sharing his ideas and opinions, while also listening to and respecting ours. I’ll admit to being a bit naive about the world of gaming, but he sold me on PlayStation 3 without having to work very hard (sorry, Jack, but you can thank your product folks). PS3 is so much more than a video game console. It’s a hard drive (that can not only store all of your photos and music from iTunes or CDS, but show/play them all through your TV), it’s access to things like NFL Sunday Ticket (when I told Lenny, he said that was worth the price alone) and streaming Netflix (both still have subscription prices, but there’s no cost above that), it’s a Blu-Ray player, it’s a Skype connection and so much more. Who knew?

Honestly my favorite thing about PS3 is the Move games. As Jack said, you can’t cheat the system. You’re forced to move and it’s extremely accurate (did I mention it called me flawless?). This is something I can feel good about doing with my kids. And they’re launching some great family-friendly games that work with the Move (Carnival Island was released Tuesday and is right up my kids’ alley…just one game and Big is already way better than I am).

After our time with Jack, we heard from other team members who showed us all kinds of cool features of the PS3, we got to test out the rear touch screen on the groundbreaking handheld PS Vita (launching in February) and we toured our way over to a game room. They had team members giving us tips on games like Ratchet & Clank, Carnival Island and Everybody Dance. I know what you’re thinking, “How do I get that job?” Me too, so watch out, the competition is on.

In the meantime, I’m excited about being a part of PlayStation Family and I hope to share more of my adventures (flawlessly, of course) along the way!

Disclosure: PlayStation provided food, transportation and gift bags for the event. All opinions expressed are my own. (Other than the PS3 thinking I’m the f word, that is.)