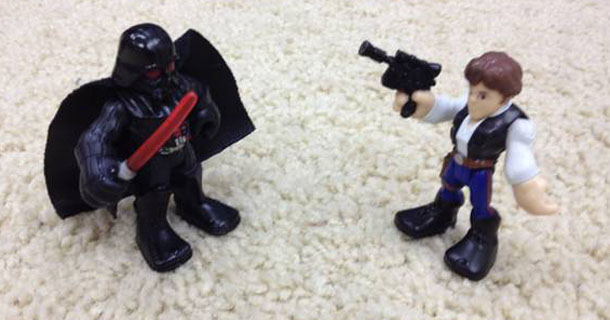 I just made a family dinner that “smelled like poop” (according to Big) and “tasted great” (according to Lenny). I wouldn’t know because, just as it was ready, it was time to get Pink in the bath and ready for bed. So now I’m enjoying some alone time and reflecting on the week gone by.

Lesson #1: If the boys—who have been at each other all day—are finally getting along, chances are they’re playing a game where they’re pretending to fight each other. Yes, lightsabers and guns, they’re a mom’s best frenemy.

Lesson #2: Even though you can’t get sick from a flu shot, you do. Every time. Pink has only had two bad colds—ever (a miracle in our house). Each one has hit within hours of the magic potion (we’re still waiting for Wednesday’s shot to wear off).

Lesson #4: I’ll take the preschooler’s germs over the kindergartener’s lice notices any day. Especially when they’re sent home the day after Big, Little and I all spent the afternoon getting cozy in the classroom.

Lesson #5: It’s a relief that my obsessive searching has proven that the only thing reproducing (at an alarming rate) on my scalp so far is grey hairs.

Lesson #6: There’s just as much name dropping at parties in the Silicon Valley as in LA. Only the celebrities here aren’t Brad, Angelina and George. They’re Larry, Steve and Mark.

Lesson #7: If your kid has a balloon biting fetish (fortunately this is one thing that hasn’t plagued one of my kids…yet), it’s probably best not to let him run around unsupervised at a birthday party with a balloon artist.

Lesson #8: It seems all good food comes in circles. Somehow, at the end of every meal (which is really the beginning, most of the time), Little only has a circle left. What can cure this? Cookies. Cupcakes. Donuts. Or chips.

Lesson #9: While Big’s diet is far more impressive than Little’s, he has his make-mommy-oh-so-proud moments too. While I was running Sight Word Bingo in his class on Valentine’s Day, he was struggling to find the word “we”. Then he explained—in front of the teacher and another mother or two—it’s because he was looking for “Wii”.

Lesson #10: Now that Big’s a two-wheelin’ biker boy, I’m going to need to invest in a better pair of running shoes or my own bike.

Time to jog my way over to the couch to veg out on this not-really-Sunday-Sunday night. Enjoy the long weekend!