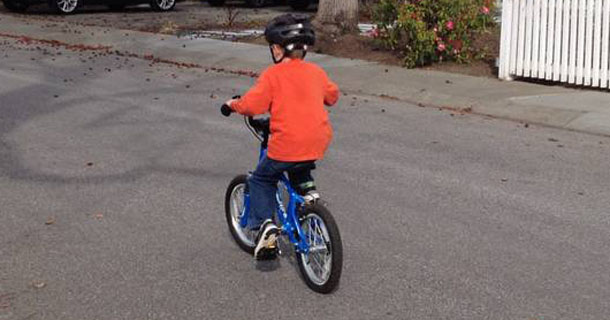 This week held two big milestones for our family. Pink turned 9 months—that’s right, ¾ of a year! And Big finally decided to take the training wheels off his bike. Both have me a bit emotional. Where has the time gone? How did they get so big, so fast? But both also have me grateful that while time isn’t slowing down, my kids are doing things in their own time—growing up at their own pace.

It’s funny, isn’t it. Every parent you talk to will say, “How is she/he already 9 months/almost 6?!” And in the next sentence, they’ll ask something like, “She isn’t crawling yet?” “He’s only doing t-ball this season?” Oh, it’s not because they’re judging me or my kids, I know that. It’s because that’s how we measure our success as a parent. By what other parents and kids are doing. And it makes us feel like—even on our most desperate days—if our kid was the first to walk/talk/read/say thank you/hit a homerun, we must be doing something right.

And of course, there are days that I find myself caught up in this mindset too. But this weekend I was reminded that I’m only stealing time from myself with my kids as I push them to the next phase. Then again, my kids have proven that they can’t really be pushed, and I’m going to embrace that. And wear it as my own badge of pride.

Big, he’s an observer. And a perfectionist. No matter how much we encourage him and work to build his confidence, the littlest mistake can break his spirit and set him back. So he waits. He watches. And watches. And watches. Then one day, he decides he’s ready. And you know what? He is. From potty training to writing to making new friends to playing organized sports at recess to taking the training wheels off, he’s proven that he can do it. Once he does, there’s no stopping him. His motivation is internal and the confidence boost each new step gives him is like gold. (And for a kid who loves money, that’s saying a lot.)

Little, his motivation isn’t so internal, but it certainly isn’t aggressive either. His comes in the shape of a circle (surprise, surprise). When he still wouldn’t walk at 15 months old, I was in a panic. Our pediatrician wasn’t. She told me to go home and hold up an M&M, then walk a few steps and do it again. Within 48 hours, that kid was running through the streets with a chocolate smeared face. Little is a passionate, stubborn kid, desperately trying to fit the stereotype of neglected middle child. But for the most part, that’s nothing a few morsels of goodness can’t solve. (When he’s interested, of course.)

Pink, well, she’s taking her sweet time as well. Now that I’m confident it’s a personality issue, not a physical one, I’m ok with it. In fact, I’m more than ok with it. She hates rolling over. She refuses to scoot. She shows no signs of using her arms to crawl or pull up. You know what she does do? She sits. Smiling, dancing and singing. Why on earth would I wish that away?

No doubt Pink will be moving all over the place, trying to eat the boys’ Legos and giving me heart palpitations in no time. Little will be writing his name from left to right, maybe even with the letters in the right order. Big will be going off to friends’ houses whose parents I haven’t known since he was crawling. And I’ll say, how did this happen so fast?!—even if on the baby-to-kid spectrum it happened to be rather slow. Because on my spectrum, the one where I have two little boys and a baby girl, it will be like the blink of an eye.

So, please kids, continue to take it slow. Because I, too, need a little more time before you grow up any more.