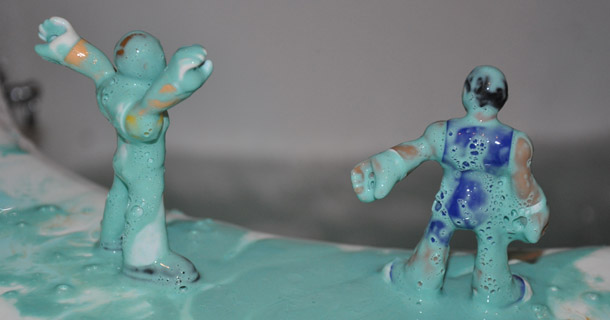 We—as in Lenny and I—are off to the city to see some of our favorite people. That’s right, it’s Sunday night and we’re hitting the town. But don’t worry, I’ll be right back on my couch where I belong tomorrow.

Lesson #2: When you’re at the checkout line with two curious boys—one of whom happens to be an over-eager new reader—you have a whole new reason to loathe the Sports Illustrated Swimsuit Issue.

Lesson #3: It is physically impossible for me to feed Pink without opening and closing my mouth each and every bite.

Lesson #4: For some reason I have a really hard time believing that Lenny’s color blind. Until he dresses Pink.

Lesson #5: UCLA had a terrible basketball season. And I know this, not because it’s discussed in my house, but because I just realized it’s March Madness and our TV hasn’t been on all weekend (though Lenny has been unusually attached to his new iPhone).

Lesson #6: When multiple moms at the afternoon bus stop (yes, at 2:45pm) compliment you for not only showering, but for wearing makeup and putting a nice outfit together, it’s time to stop writing publicly about your lack of hygiene.

Lesson #7: When your kindergartener comes home with a sore throat, asking if he’s been kissing the girl in his class who’s home with strep may not be the most compassionate—or well received—response.

Lesson #8: They should update the strep throat notice they send home with the following symptoms: Sudden and extreme loss of sense of humor, false belief that death is imminent, extreme irritability toward family members, temporary relief of pain with realization of movie-watching opportunity.

Lesson #9: There are few things cuter than a bunch of little boys decked out in baseball uniforms on Opening Day of Little League.

Lesson #10: When you see your 3-year-old boy drop trough and pee in the bushes (from too far away to yell or cover him up) at his brother’s t-ball game, shame on him. When you see him do it again and blog about it publicly, shame on you.