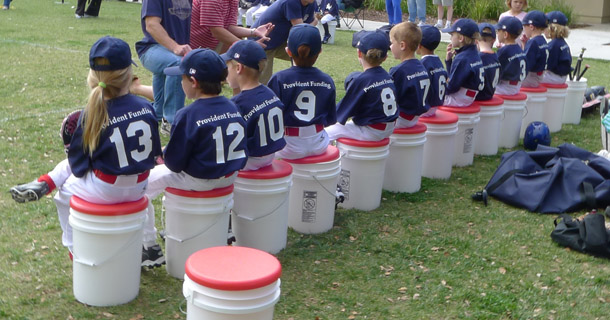 On Saturday morning at 8:30am, I found myself all teary-eyed. Everywhere I looked were boys—and even a few girls—in uniform. Some were perfectly tucked, belted and buttoned. Others were over-sized, crooked and mis-matched. But every single one of those kids had a look of pride and excitement—yes, today was Little League Opening Day.

I kept thinking, this is precious, hilarious, emotional and monumental. Especially for the rookies—those little t-ballers—whose team names were called as they were greeted by a tunnel of high fives from the “old” pros. So as I heard things said, I wrote them down thinking they’d help me write something poignant about the experience. Then I realized the quotes themselves tell the story of little boys and girls taking the field—and their parents cheering them on—for the very first time. So, here they are…

“Hey Dad, are you going to teach us how to play t-ball before the game today?”
– One of Big’s coach’s sons at the Opening Ceremonies…a couple hours before game one

“Winning is important, but making good choices and being a good person is more important.”
– Commissioner at the Opening Ceremonies

“This coach is so amazing, he should have a Wikipedia page.”
– Commissioner at the Opening Ceremonies…you know, in the Silicon Valley

“First rule of public speaking: Know your audience.”
– Friend at Opening Ceremonies after every parent volunteer possible had been thanked and every five- and six-year-old nose, ear and butt had been picked (a number of times)

“Take me out to the ball game, take me out with the crowd. Buy me some peanuts and Cracker Jack. I don’t care if I never get back. Cause it’s root, root, root for the Red Sox. If they don’t win, it’s a shame. For it’s one, two, three strikes you’re out at the old ball game!”
– Just about everybody at Opening Day Ceremonies…and Big swears they said “Red Sox”, which just happens to be his team

“How much bases are there on a baseball field?”
“First base, second base, third base and home.”
“So there’s three or four or five.”
– A conversation between Big and me, in the car, on the way to his first t-ball game

“My coach told me he wants me to focus on hitting the tee.”
“You mean the ball?”
“No, the tee.”
– A conversation between Big and Lenny, in the car, on the way to his first t-ball game

– A hand is raised midway through the coach’s pre-game pep talk, just as Lenny asks a friend how much she thinks the kids are getting:
“My dog is here.”

“Ooh, off the head!”
– A parent (cringing while) watching the first inning of the first t-ball game

“The Paparazzi ain’t got nothing on us.”
– One of the 14 parents on the sidelines of the first t-ball game, capturing each and every precious moment

“Go back, go back, you can’t run diagonally across the field from first to third, you have to go by second base!”
– Parents shouting to the little girl who, apparently, thought she’d like her first hit to be a triple

– A mom asked her son why he was running to the bench mid-inning:
“I’m in the outfield, but I forgot my glove!”

– A mom realizing her son may or may not know where he’s supposed to be on the field:
“He’s playing deep short.”

“Buddy, you’re in the field. Playing second. You don’t have to run the bases.”
– A dad on the sidelines

“I Team Mom’ed the heck outta Safeway.”
– My co-team mom who was in charge of snacks and drinks for game one

“Everyone told me I got the hit of the game!”
– Big, feeling confident about his performance in game one

“The next game is the Oreos against the A’s.”
– Big, after some kids in Orioles uniforms walked by

– And—after all is said and done—Big’s favorite part of game one:
“Sitting on the bench and watching.”

So while the kids may not have known every rule—or, heck, even some of the basics—before that first t-ball game, I’d say the coaches did just what they were supposed to. They showed the kids how to have fun playing the game and gave the parents a day they’ll never forget.