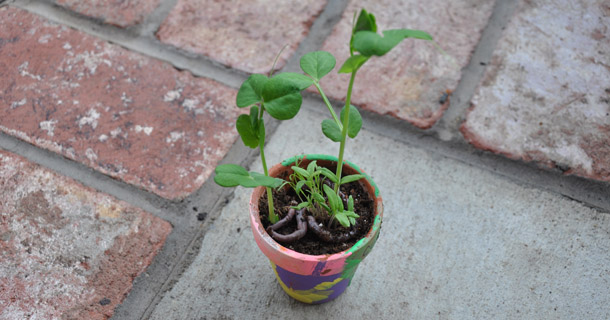 And…this week was Little’s Spring Break. Considering we were stuck inside dodging the rain most of the time, it went reasonably well. (For a blogger who needs good stuff to write about, that is.)

Lesson #1: Kids can be too comfortable with worms and snails. Since Big was back at school, Little spent his Spring Break making new rainy-day friends—long, slimy ones. He invited them into our home to run free and then (after seeing how high my heart rate could go) gave them a new home in his plant outside (“Because their poop will help it grow!”). And when I asked him to set his equally impressive snail collection free out front, he did. On the porch…right next to the opening of my rain boot, which he’d knocked over in the process.

Lesson #2: Need something to entertain you while baby’s playing in the bath? There’s an app for that. So into your game that you don’t notice the baby pooped in the tub? There’s a wife for that.

Lesson #3: Lenny really is a good salesman. Somehow he convinced the boys that it was “a special treat” to watch him play golf on his iPad. (All while Pink and I continued learning Lesson #2—no pun intended.)

Lesson #4: When your baby gets into the groceries, you have to hope that the box her new crackers came in is organic too. The good news is (believe it or not), she desperately needs more fiber in her diet. (And for anyone who says marketing to kids isn’t effective, you should have seen her throw everything else aside to dig into that box with Elmo on it.)

Lesson #5: When I signed up for motherhood, I had no idea how much of my day (or blog) would be dedicated to poop.

Lesson #6: It seems the person who programmed my iPhone auto-correct did know what I signed up for. As I was emailing a friend asking about a cookie recipe, it helped me out by saying they were for someone with a but allergy.

Lesson #7: When your 3-year old asks why you don’t exercise anymore, you can’t help but wonder the same thing. (Until you watch him “accidentally” tackle his baby sister who’s helping herself to her third box of crackers.)

Lesson #8: When—in your desperate attempt to get out and prove to your son you’re not a lazy sack of bones—you to try a class called Adult Jazz, you don’t think about the fact that 16-year-old girls totally think they’re adults. The upside is you’re not the only one squealing when a song you’ve only heard on Radio Disney (which may or may not be because that’s all you listen to ) comes on.

Lesson #9: If reading the Safeway coupons (hey, did you know mouth swish is free?!) counts for Big’s Read-a-Thon, he might win the grand prize.

Lesson #10: When you’re obsessed with sports, every cup, shirt and jelly bean represents a team/teams. (I got the Vikings, University of Washington and the Lakers! Well I got the Broncos, Texas and the Giants!)

Lesson #11: Discovering your t-ball game finally isn’t rained out and that you finally have loose tooth—all before 9am on a Saturday—is enough to send a 6-year old into a frenzy.

Lesson #12: When your 3-year old insists you read the same few books every night for weeks, it’s a great opportunity to practice various exotic accents.

Lesson #13: Pink may not be into crawling, but she has mastered kissing. She does it often and with enthusiasm.

Lesson #14: It is possible to be into bad boys before your first birthday. I swear I saw Little’s Darth Vader blush when Pink scooted his way the other day. She also kissed a girl. And liked it.