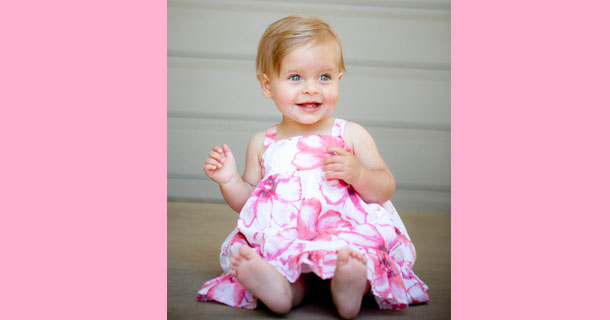 Way back in the olden days when Lenny and I were dating, he planned a big night out for us. After all, we’d been dating a whole six months. Six months! At that point in our lives, it felt like forever. Or the beginning of forever, at least. We were living in LA and he took me to see Rent. I thought it was magical—all the singing, dancing, fighting, struggle, love. From then on, any time I drove back and forth between my parents’ house and LA, I relived it by listening to the soundtrack in the car. Five hundred twenty-five thousand six hundred minutes…How do you measure, measure a year?

Now, almost 15 years (and a whole lotta minutes later), six months goes by in the blink of an eye. So two blinks later, Pink is turning one. Today. She’s one.

And if I look back, it’s been quite a year. It can be measured in all kinds of ways.

In diapers, in babbles, in nose drops, in teething tablets.
In late nights, in scootches, in laundry, in strife.
In five hundred twenty-five thousand, six hundred minutes.
How do you measure a year in the life?

But I know I’ll always remember how I literally watched hearts get bigger when she entered the world. The peace that came over me as a mom doing this for the third time, and finally feeling completely at peace with my abilities—and inabilities. The way Lenny suddenly seemed to understand that a girl and her dad have a special bond. The way two unruly boys started speaking in soft, sweet voices and using words like “precious”, “sweetie pie” and “beautiful”. The way friends and strangers alike softened when they saw her welcoming smile.

The world changed a year ago today. Well, my world did, at least.

And that overwhelming change, well, it can only truly be measured in one way. Measured in love. Seasons of love.

Happy Birthday, precious, sweetie pie Pink! We love you so very, very much.

Photo by the truly amazing and talented Jenny Lee. Used with permission.