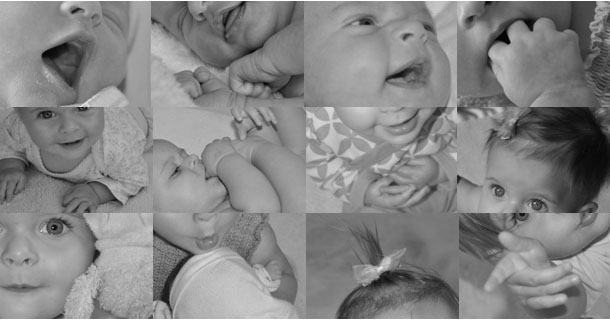 Six years ago when Big was born, I would spend hours sitting around playing with him and capturing every little coo, yawn and ah-ha moment. He had my undivided attention and I have the full hard drive to prove it. Then came Little, and there were fewer photo shoots. Especially solo. So when Pink was born, I wanted to be sure I really captured her first year, since I know that in no time—no matter how hard I try to remember every moment—it will all be a blur.

I took inspiration from my amazingly talented friend and photographer, Jenny Lee. She wrote a great post on her blog about how she keeps the best piece of artwork her son brings home from school each week, then at the end of the year shoots him holding each and makes it into a collage. (Her kids know how to work the camera and the collage is in and of itself a work of art!)

Well, Pink has yet to dive into finger paints and glue, but just watching her is like seeing a piece of art come to life. Slowly, her smile takes form. Then her hand finds its way to her mouth (followed by her foot, of course). Soon enough her hair grows enough for a bow, then a pony tail. Then she decides her lovey is even lovey-er on her head. And her kisses are for her one and only—her baby doll. Yes, this helpless piece of adorable mush is now a full-blown girl, packed with personality.

So, I took a bit of a different spin on Jenny’s approach. Starting with week one, I took a picture of her every Tuesday on the same blanket (that is, until she could move right off the blanket). I’d try to capture whatever “big” thing happened that week—be it a new developmental milestone, a new attachment or a new favorite outfit. It’s been such fun to track her in size—in relationship to the blanket—and over time as she changes.

Now that she’s officially one, I plan to pick my favorite shot from each week and make a photo album of a picture a week. I’m hoping to keep this up each year, but the first year is unlike any other in the drastic changes you see in your baby. And next school year, the boys are going to join in the fun (even if they don’t think it’s all that fun). I plan to take a picture each week (rather than waiting until the end of the year) so I can watch them grow right along with their skills/interests. For Little, I may capture his favorite superhero/bad guy/animal of the moment. For Big, his favorite piece of writing (or more realistically, his favorite trading card). Time will tell.

But I want to make this quick pic a priority. Because while the days may blend together, no matter how old your baby is, there are little precious moments along the way that deserve their time in the spotlight (or the flash, for that matter).

This post is sponsored by Disney Baby. I’ll be joining the Disney Baby blogging team next month, and look forward to sharing these kinds of stories (projects/ideas/etc) with you over there! Stay tuned for more details!