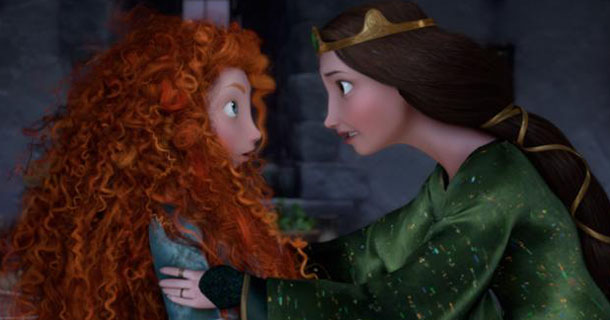 Bears. Lemonade-up-the-nose laughter. And a mom who was wrong all along. If you ask Big, those were three of the things that stuck with him after our fun date night in San Francisco for the screening of the Disney Pixar film, Brave (in theaters tomorrow, June 22nd). The funny thing is, I kind of agree.

Luckily I had heard that Brave has a dark side to it (after all, every princess tale needs conflict to make the happy ending that much happier). Big and I talked ahead of time about the fact that there would be some scary scenes involving bears. He was prepared, I was prepared, and I got to hold his hand through part of the movie. (You won’t get any complaints from me.) I have a feeling if we’d seen it in the light of our living room on a TV it wouldn’t have phased us. But be warned, there’s just something about that big screen and pitch black room that makes everything more intense—especially growling bears in attack mode. (Then again, we both thought Tangled was really scary in the theater too, and now it’s one of the kids’ favorites.)

Laughter is one thing I’ll take in the intense form any time. And Big and a couple of his friends had me laughing at them because they were giggling so hard during certain parts. Boys. Laughing hard. At a princess movie. And while some of the comedy was a bit silly, I loved that they found a way to pull everyone into the story on a different level.

Which brings me to the mom. The queen. Who was wrong the whole time. As soon as Big said that, I got all defensive. Because, thanks to her very realistic forehead wrinkles, she was the character I could relate to the most. But, in the end, you see that—though she truly meant well all along—she was wrong. But the beauty of it, the heart of it (and I really felt that there was a lot of beauty and heart to it) was that Merida, the princess—who also truly meant well all along—was wrong as well. It took each of them seeing the situation from the other’s perspective to live happily ever after.

As a former teenage girl with a mom, I know how hard it is to figure out who you are versus who someone wants you to be. (Even if it’s pretty much the same thing after all.) As a mom with a future teenage girl, I can imagine how hard it must be to go from being that little girl’s everything to letting her be everything all on her own. (Even though you know she is everything she is thanks to you.)

So I guess what I’m trying to say is that I found Brave to be so very human, honest and insightful. The adventure, the characters, the personality, the heart—it was my kind of fairy tale. (Goodness knows I don’t go easy on the princesses.) Brave was proof that it doesn’t take ballgowns and a prince charming for a princess to be beautiful, smart, strong and happy. But it does take a family who will always be there for her. (Yes, this will be required reading on Pink’s 13th birthday.)

And, beyond the big screen… As soon as we got home from the movie, I downloaded (what happens to be the #1 app right now) Temple Run: Brave. During some downtime this morning the boys played and love, love, loved it. I had to pry my iPhone out of their hands. We also downloaded Brave: Storybook Deluxe. While the boys didn’t seem to agree with me (imagine that), I thought this was a better one for the littler kids. It includes the story (a good way to prep your kids for the theater), as well as fun activities like coloring, puzzles and an archery game.

Disclosure: Big and I were treated to drinks, popcorn and the movie by Disney Mobile Games. I also received a download code for an app. I was not required to write about any of this and was not compensated for this post. All opinions are my own.

This photo was made available for use by Disney here.