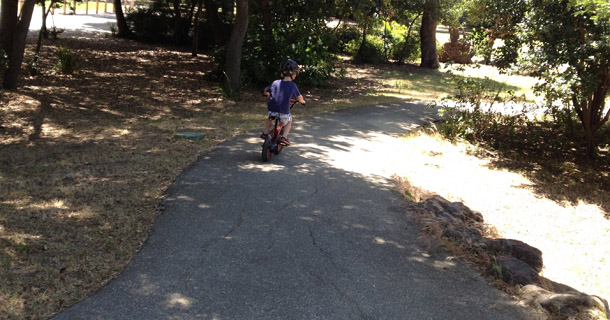 The pedaling, the down, that’s Little. The faster, well, that’s my heart rate. I can’t help it. His speedy, confident little body has been through the ringer lately.

Recently, within a week-and-a-half span, Little had chipped his tooth and cut up his face, dislocated his elbow, and split his chin and mouth open. (I have no idea how he escaped injury jumping from a six-foot play structure or playing full-blown tackle football (again) during the same time.) A couple injuries were the result of him insisting on riding a two wheeler at the age of three (yes, I do see the irony). The other was a fall off the couch he likes to scale like a cat. Somehow “I told you so” didn’t make his elbow or my gut feel any better.

I can’t help but hold my breath as I watch him. On the one hand I’m amazed by his strength, his sense of adventure, and his ability to keep up with the big kids. I admire his tenacity, agility, and don’t-look-back approach to life. What’s just as amazing is that when he gets hurt, it’s totally dramatic and exhausting. But the moment he’s patched up (be it back in the socket, stitched up, or band-aided), he instantly forgets and moves full speed ahead to the next adventure.

Funny thing is, I can’t seem to do that. Instead I cringe as he hops back on his bike and pedals as fast as he can down hills and around curves. I quickly scan every new place we go for platforms and objects that beg him to climb and jump. I feel my blood pressure skyrocket as we wander by ponds and fountains, knowing they’ll draw him in eventually.

I jump too quickly with every little slip of his foot, begging him to be careful. I panic when he escapes from my line of sight, thinking somehow my gaze will have the power to keep him balanced and focused. And I consider inventing a bubble that will pad his every mis-step until his coordination can catch up with his confidence. (Which my pediatrician says could be another year or so.)

As you may have read, I’ve also been struggling with how to handle Big’s new found, post-kindergarten confidence. How do you instill confidence in your kids while keeping them grounded and safe?