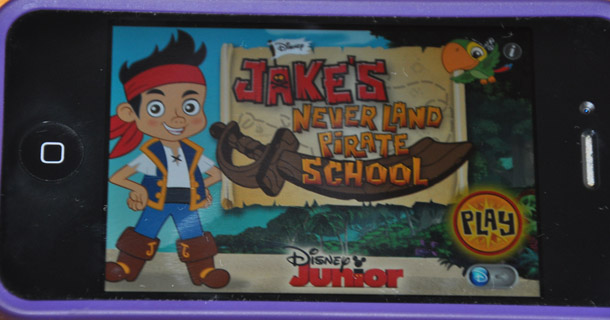 It’s no secret that my kids love cartoons. And so do I. Not only do they give me glorious free time (to squeeze in some dish washing, writing, and fake sleeping), I also feel like my kids learn a thing or two along the way. More points in the “good mom” column, thankyouverymuch.

When it comes to my iPhone and Lenny’s iPad, well, we’re a bit more territorial. But there are definitely times that handing over our cherished electronic babies to our restless real-life babies is a must. (Yes, really, a must. Have you ever had a kid in a waiting room of the general surgeon waiting to get stitches?)

Lately the boys have been politely asking for something new to play. And today Little scored big time. Two of his favorite Disney Junior shows (which also happen to be two of my favorites for kids) have free (yes, free!) apps. More points (ok, finally some points) in the “frugal, yet awesome mom” column, thankyouverymuch.

This morning both Little and Big had fun playing Jake’s Never Land Pirate School. They started by turning themselves into pirates. (Not that unusual around here, I’m afraid.) They thought it was hilarious getting to use my phone’s camera to snap scurvy-dog-like portraits, then they went on to enjoy some treasure hunting, wiggling, cheering, pixie-dust flying, and gold doubloon collecting. And since the “classes” are rather short, they could easily take turns without having the other one whine and beg for the game. Amazing, I know.

Before bed, instead of simply watching the cartoon, I let Little play Mickey Mouse Club House Road Rally on the iPad. It’s an interactive episode (AKA appisode) that engages the user in the gang’s adventure. He had to find a triangle-shaped bush, count rubber ducks, shake coconuts off trees, determine which mouseketool was best, and, most importantly, say, “Meeska-Mooska-Mickey-Mouse!” to get the fun started. Basically, it takes the things they pretend to ask the audience for help with when watching the show on TV, and actually makes the kiddos do the work. At the end it highlights the player’s accomplishments (but not before insisting that you join in the Hot Dog Dance, thank goodness). This is the perfect road trip time killer or why-on-earth-don’t-you-nap-anymore quiet time filler. (Be warned: Since part of the interaction is the kids talking — or in Little’s case, yelling — think twice before letting your little one play it in the middle of a PTO meeting.)

Let your little ones in on the fun, then go check off something on your to do list. Click below to download these free apps now! (You and your cup of coffee will be so glad you did.)
Jake’s Never Land Pirate School
Mickey Mouse Club House Road Rally

Join us August 8th at 9 PM EST for a Disney Junior Twitter party! You could win an iPad.
RSVP at http://bit.ly/QsXDE2 and use the hashtags #spon and #mackidtips

Did you know Disney Junior WATCH makes full-length episodes of its popular shows available online at www.watchdisneyjunior.com and via the Disney Junior WATCH app on iPad, iPhone and iPod touch for free? And Comcast Xfinity subscribers have access to premiere content, including a live feed of the network online and through the app. After the live feed, current shows will be available “on demand”—you have up to 10 days to catch up. But the best part (with kids like mine), is that your little ones don’t have to fight over what to watch. One can watch on the TV, while the other watches on their favorite device. (If you’re not on Comcast, you can contact your cable provider to ask for the service via the website or the app.)

A big thanks to Disney Junior for sponsoring this campaign. Click here to see more of the discussion.