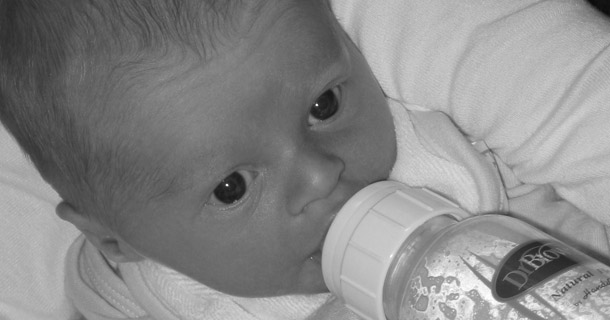 (For those of you who don’t live on Facebook or have a mom who listens to lots of talk radio, let me summarize: Mayor Bloomberg has decided to lock up the baby formula in hospitals and throw away the key. Ok, not really, but he would if he could. Read the details of how he’s pushing hospitals to eliminate all baby formula marketing and hide the products here.)

For the most part, I try to avoid chiming in on media hype. But this story, well, it hits close to home. (I know, I know, this is sounding oddly familiar, isn’t it?)

I have two boobs. I have three babies. I have no milk. Not just now. Ever. No milk. Which, I guess, is probably the same amount Bloomberg has. So that makes me as qualified as he is to tell you how you should feed your baby. Right?

Goodness knows I dove into motherhood ready to drop my top every couple hours. To connect with my baby in a way unlike any other. To ensure that helpless little body evolved into a strong, healthy one. I took the pre-baby breastfeeding class (from the best of the best!), I rocked the latch and hold I was taught, I even nailed colostrum production. (You can imagine my pride when I left the hospital with such high honors.) But then, that time when your milk comes in, well, it never came. In less than a week, Big was down over a pound from his birth weight and he was—quite literally—starving. In came the medical grade pump, the feeding syringe, the guilt, the sleeplessness, the absolute torture of being a mysterious medical case.

When I went through this struggle with Big, I felt terrible. About myself. About what it meant for him. Before I even knew I’d be in this position, the nurses and lactation consultants at the hospital made it clear that there was only one—one—right way to feed a baby. So you can imagine my horror a week later, the day the pediatrician handed me a sample of formula. He told me I simply had to feed my baby—immediately.

It felt like a slap in the face. Like he’d taken away my imaginary certificate from the hospital and ripped it up in front of my face. Here I was a week into motherhood and I was failing. I. Do. Not. Fail. (Not gracefully, at least.)

By the time Little came around, I’d seen new doctors with new ideas and new hope. I was ready and willing again. Nothing. This time I gave in faster, but it wasn’t any easier. (Though being at a different hospital—which I knew was a must—with lactation consultants who were truly supportive, creative, and understanding made for a much softer landing on the fall from grace.)

The third time around with Pink, I was empowered as well. Not with the hope that my body would miraculously do what it hadn’t ever done before, but with the knowledge that my baby would be just fine. I didn’t hesitate to request formula and a pump right away. I still rocked the colostrum and I gave nursing one last try. But I knew what I was up against. And I knew that bottle feeding wasn’t all bad. Formula feeding means help, sleep, freedom. (It also means a huge expense and a ton of dish washing, of course.)

The only way to know what’s right for you—for your baby—is to live it. Nobody else has walked a mile in your nursing bra.

You can read, take classes, join organizations, and hope. But the fact of the matter is, everybody’s body is different. And, while most mother’s bodies instinctually make just the right amount of milk to help their babies thrive, others don’t. Some women find nursing to be an extremely calming, bonding experience. Others are so haunted by pain or other difficulties that it actually slows the bonding process.

If everyone were the same, life wouldn’t be nearly as interesting. So be proud that you’re a mother who cares enough to help her baby thrive. Period. No matter what the nurses, lactation consultants, know-it-alls, media, or politicians may say—or do—to make you feel otherwise.

Do you think formula should be made less accessible in hospitals to encourage breastfeeding? Or do you think it puts undue pressure on new moms trying to navigate nursing?

There’s more where this came from:
The Risk of Not Breastfeeding
Formula Saves Lives Too