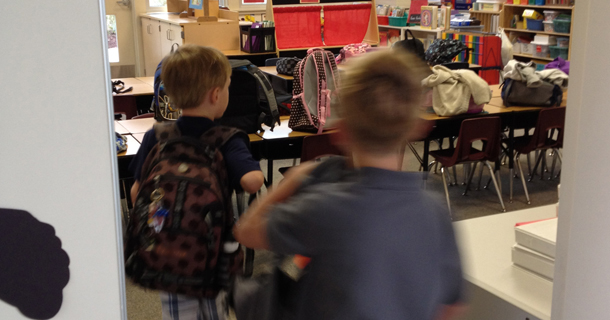 We’re officially back in bus/lunchbox/playground/learning/outrageously cranky afternoon mode. If the rest of the year goes as well as this week, I won’t have much to write about. (Scary, right?)

Lesson #1: The first day of school was far more emotional for me than Big (again) this year. How do I know? This is all we saw of him after racing to beat the bus so we—yes, I dragged the whole family—could say goodbye to him and send him off into his classroom. His back looked super excited to start 1st grade.

Lesson #2: It’s a good thing Big loves rules. According to him, his teacher has already scheduled conferences with three kids’ parents. (Who totally deserved it, of course. Rules are rules.) And, yes, you can bet I was on my best behavior at Back to School Night.

Lesson #3: You know that moment you really want to make a good first impression (like at the preschool meet and greet where it seems to be all new families)? Your baby doesn’t care.

Lesson #4: Distracting Pink by handing her my car keys may not have been my best move. When we left the school—an hour plus later—one of my rockin’ minivan doors was stuck open half way and all of the windows and sunroof were open. (Yes, she’s far more tech savvy than I am—I guarantee I couldn’t make all that happen if I tried.)

Lesson #5: I’m thinking that since Pink is too young to attend school, I might look into having her teach—yes, teach—at the local middle school. Her Tantrums and ‘Tude course could show even the sassiest tween girls a thing or two.

Lesson #6: While there’s no doubt Little still misses Big terribly while he’s in school, it’s Pink turn to go through the adjustment period of being stuck home alone with me. When we picked Little up from his first day (which went amazingly well), she was screaming his name (the only way she really says it anyway), giggling, and doing everything in her sloppy power to hug and kiss him.

Lesson #7: If the boys took care of Spidey (the hermit crab) the way they’re feeding and nurturing the plastic black cat flashlights and rubber bat they found in the Halloween decorations, that little guy would still be with us.

Lesson #8: It’s a good thing Big lifts weights. (At least that’s what he said when I asked him for to carry a big disposable aluminum pan of burger-ready lettuce pieces a couple blocks.)

Lesson #9: Sometimes someone else’s words capture an experience better than your own. Like my friend (and neighbor), Amy’s. “There’s a port-a-potty in front of our house. The DJ is warming up. The tweens are playing with the tots, who are all anticipating the cake walk. The grills are fired up, the kegs are flowing and the blenders are whirling. The disco ball is suspended across the street. We’re all bringing our yummiest treats. The old fire truck is giving rides. It must be the annual neighborhood party!” (Though somehow this doesn’t capture the excitement of being the only parent to three kids—including one sick baby—while their dad was in Pasadena, 5 hours into a UCLA tailgate party.)

Lesson #10: My three-year old is smarter than I am now. I’ve been telling him if he keeps burping at the table, he’ll have to go eat by himself in the garage. So today, when I wouldn’t let him eat breakfast out there, he explained ‘no’ actually wasn’t an option. He had to—it was his punishment from burping too much. Touche.

Come on now, you didn’t believe I’d really have nothing to write, did you? Here’s to a new school year of a bit of learning and lots of laughs (for us parents, that is).