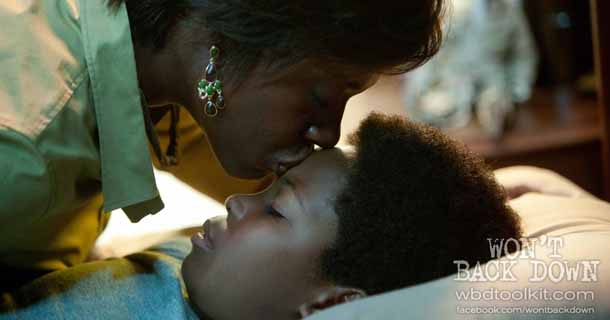 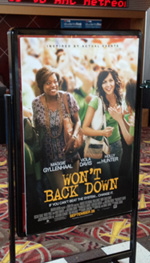 So this week, when I was invited to Circle of Moms’ private screening of Won’t Back Down, a new Fox Studios film, I knew I’d enjoy it, but I didn’t know how much I’d be able to relate. Viola Davis, Maggie Gyllenhaal, and Holly Hunter give outstanding performances in the film, which tells the story of two determined mothers looking to transform their children’s failing inner-city school. They risk their jobs, reputations, and relationships to make a difference in the education and future of their children.

As the story unfolded, I found it was true, I couldn’t relate to a school where the teachers don’t care and the kids are pushed through without learning how to read, write, or add. Thank goodness.

Won’t Back Down is an inspiring story about motherhood. It’s a reminder that our job as moms is to love our kids, be their advocates, and take responsibility for making them the best people they can be. Period.

Of course, for dramatic effect—in Hollywood, that’s kind of their thing, you know—the film was heavy handed on the good guys (rogue moms) versus bad guys (teachers relying on tenure and the union that protected them). I also found it simplified the outrageous complexity of dyslexia and learning disabilities. But I realize it wasn’t a documentary and they only had so much time to get their point across while keeping the audience entertained.

From where I sat, I didn’t see it as a call to action for moms everywhere to start busting down doors, taking down unions, and taking over schools (many people are upset and concerned about this). It was hardly a realistic “how to” manual. I saw it as a wonderfully entertaining and thought-provoking story. (After all, upon seeing Erin Brockovich, did the average woman start taking on multi-billion dollar companies?)

While I’m not a professional critic, I give this film three sweet kisses on the face. Because that’s exactly what I do to my kids each night as I thank my lucky stars for all we’ve been blessed with.

Check out the trailer:

Check out the other bloggers I got to meet and hang out with who have reviewed/will be reviewing the movie as well:
Unknown Mami
The Foggiest Idea
Silicon Valley Mamas
The Outlaw Mom
Cookies and Clogs

Disclosure: I was invited to a screening of the movie Won’t Back Down as a guest of Circle of Moms and Fox Studios, and was compensated for my time. All statements and opinions are my own.