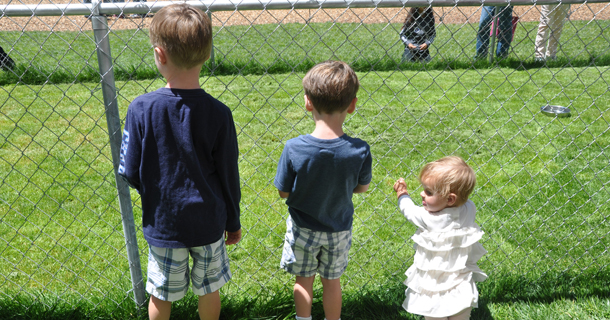 You know what I love? Chocolate. But also when a friend reaches out to ask me if I’ll write about something. Because, chances are, it’s something I’ve thought about, but I haven’t known exactly how to address it. This is one of those topics. My friend sent me a message on Facebook asking if I’d cover “Deciding to Have Another Child”.  She knows I’m no expert. And I obviously can’t address the financial, fertility, and logistical questions that come with this topic. I’m just a mom with three kids. And a computer.

So, as her message rattled around in my head, I found myself watching my kids. And trying to remember, what made me think this was a good idea?

It certainly wasn’t the diaper changing and sleepless nights. Or the childcare shuffling and fun at the pediatrician’s office. Did I mention I sent both kids to school in tears yesterday? And no, it wasn’t the desire to start one more college fund. Honestly, in our case, it was just sort of a gut feeling that our family wasn’t complete. As I’ve written, before I was a mom, I always thought two kids felt right. Then, somewhere along the line, three did.

So, as I’ve thought about it, I’ve realized I really can’t tell you how we decided to have more kids. But I can tell you why I’m glad we did.

It starts with love. And math. You see, if two people fall in love, that’s an awesome love. But then when you throw a third into the mix, there’s exponentially more love because each person loves two people. Add another, and it’s exponentially more. And so on, and so on. (Which may explain why socks start to disappear…there’s just no room left.)

So, even on the days I want to pull my hair out (and I really and truly have bald spots, but that’s another post), I can find lines to add to each love story. Here are just a few.

Big [hearts] Little
He hurls insults at him. And fists. But he also says and does things like this.

Me (testing the waters of the new school year): “Who would you say your best friend, or someone you really like playing with is this year?”
Big: “Well, Little’s my best friend.”
Seriously, kid? We’ll keep you.

On Back to School Night, he had two assignments displayed. The first was Who Are You? My name is Big. I like to play sports with my bruther.

The second, What Was Your Favorite Thing About Summer? It was a picture of him playing with Little in the waves in San Diego. Yes, really.

Little [hearts] Big
Have you seen the way he looks at him? Or tries to be like him? Or splits the M&Ms he’s earned for nail cutting into two baggies and saves them to share—putting all the blue and yellow ones in Big’s bag since he likes UCLA? Oh, and did I mention that he tricked me into going by the bus stop on a bike ride Big’s first day of school, then refused to leave until Big came home—even though it was an hour early? [insert heart melting]

Big [hearts] Pink
He wants to read to her on the couch. He wants to be the first person to go in and say good morning. He wants all his friends at the bus stop to see her latest talent (like wearing his baseball cap—watch out Ms. America!).

Pink [hearts] Big
She doesn’t say his name, she screams it (a trick she’s learned from Little…not me, of course). She pants (yes, like an excited puppy) when she realizes we’re going to pick him up somewhere. She lets him hold her.

Little [hearts] Pink
Whenever she cries, he gets her her lovey, baby doll, and a teething ring out of the freezer. He lets her play with his little Star Wars guys.

Pink [hearts] Little
All he has to do is make a silly noise and she laughs so hard she can’t breathe. She kisses him. A lot. (When she’s not hitting him, that is.)

See, that’s a whole lotta love. And, that my friends, is worth its weight in laundry.

What about you? How did you decide to have (or NOT) have more kids?