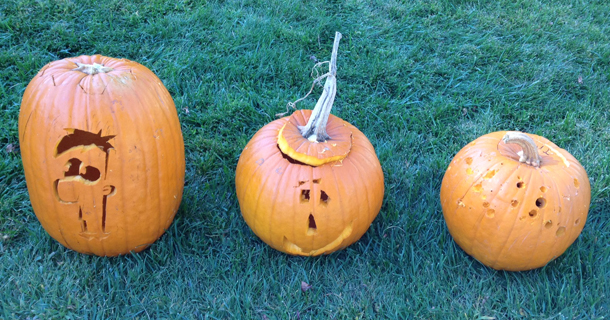 I had lessons 1 through 10 done this morning. But then I set the boys (including Lenny) free with knives and other sharp tools — not even with blog fodder in mind. Promise.

Lesson #1: When the kids wake up and decide to make their own breakfast, it seems like an awesome idea. That is until you realize the main ingredient was honey.

Lesson #2: It’s a sad day as a mom when you realize you have to fold your kid’s pants in threes so they’ll fit in the drawer.

Lesson #3: It’s an annoying day as a mom when that kid starts talking about himself in the 3rd person. Constantly.

Lesson #4: Little has a new favorite way to pass the time while Big’s at school: shoe shopping. I’ve indulged him a couple times only to find that, not only are his new shoes hideously cool, he refuses to wear them.

Lesson #5: My kids missed me so much while I was at Coca-Cola it made them sick. Literally. So Little got to make up for lost time with me by skipping out on school for a few days.

Lesson #6: Apparently “ability to breathe” is not on the list of requirements for a 3-year old to wreak havoc.

Lesson #7: There comes a point when even a 3-year old tires of playing Chute & Ladders, so he has to change the rules to mix things up. Down the ladders, up the chutes it is!

Lesson #8: M&M’s may be the world’s most undervalued parenting tool. They worked their magic again in our house this weekend, and by golly, the girl is walking! (Slowly, and hesitantly, but we’ll take what we can get after all these long months.)

Lesson #9: Pink has suddenly become a little less Taylor, a little more Shakira. Luckily we have about 9 years to reign in those hips before the school dances begin.

Lesson #10: No doubt the boys will look back on this Halloween and wonder why all of the pictures in costume are of Pink. Contrary to what they think, it’s not because she started walking this week. It’s not because she’s our favorite (especially since she keeps making huge messes and was the one to wake up around 5am today). It’s simply because they finally broke me and I’ve stopped trying to chase them down with the camera.

Lesson #11: It takes being at a friend’s house for me to lighten up when it comes to the pumpkin carving chaos (all those laid back moms were oh-so impressive…see, peer pressure isn’t always a bad thing). After letting Big do his own thing (for a good hour), he beamed, saying, “This is the first pumpkin I’ve ever carved. You never let me do anything!”

Lesson #12: Lenny’s just as bad. We had two pumpkins left to carve today so Big got one and Lenny got one. Little? Oh, he had an important job: stay out of the way. After watching him watch them, I finally let Little carve the back of Big’s pumpkin from the party the other day. We ended up with a perfect Ferb, a fun Jack O’, and, well, a mutilated pumpkin back. (I’m thinking Little and sharp instruments need a good year-long break from each other about now.)

Lesson #13: Big is just as competitive as Lenny. He was working on cleaning out his pumpkin for so long, I tried to move him along. He answered with, “No. I want mine to be even cleaner than Dad’s.” About 20 minutes later, I said, “Wow, that’s so clean you could eat Thanksgiving dinner out of your pumpkin.” He replied, “Yeah, well I want it so clean I can drink soup out of it.” Sigh.

Lesson #14: Even though we ended up with three broken knives, I consider this day a victory. We only needed one bandage.

Stay safe, take lots of great pictures, and enjoy your Halloween week! We’re off to the neighborhood chili cook off now. (Because in this awesome ‘hood, a Saturday morning Halloween parade isn’t enough.) It should be a hoot! Oh, and GO GIANTS! (That was for my kids.)