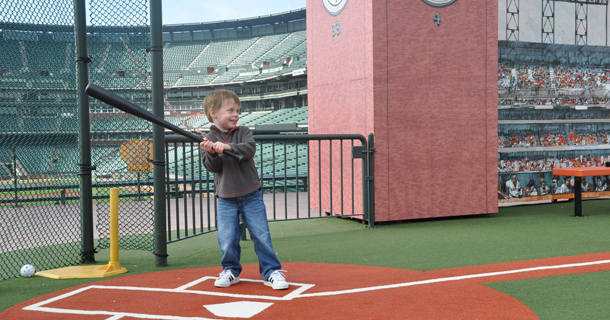 “Mom! The Giants are going to the Worlds Serious!”

That’s how Little greeted me this morning. The look on his face, the excitement in his voice. It was childhood enthusiasm at its purest. And all because of some sweaty guys in uniforms. Pretty amazing, right?

Growing up in A’s territory (when the A’s were people like Mark McGuire and Jose Canseco) and being married to a Padres fan, I’m not hard wired to cheer for orange and black. But this year, I couldn’t help myself.

Big’s obsessed with sports —especially baseball — to begin with, but this playoff season and World Series took his passion to new levels. He would come home from school talking about who was pitching (on both teams), and rattling off stats of various players. He’d watch the games, telling me everything that was going on — from the strike count to the Stand Up 2 Cancer fundraiser to the weather report. He’d wake up in the morning eager to wear his Giants shirt to school. Again.

To him, he wasn’t an observer of this World Series, he was an important part of it. He was celebrating the wins, agonizing the defeats, and seeing the possibilities that come with hard work, support, and talent. He saw that a strike out doesn’t mean you can’t get back up and try again. He saw that when a team works together, they lift each other up. He saw that one game’s star may be the next game’s let down. He saw that heroes come in all shapes and sizes (sporting all kinds of facial hair). He saw that just because the odds are against you, doesn’t mean you should write yourself off.

And the community aspect of it, that was just awesome. Big learned that when people share a common interest, you can have really interesting conversation and share in each others’ joy. He learned that even if someone doesn’t cheer for the same team, you should have fun in discussing the competition rather than making them feel bad about it. He learned that you don’t have to know someone to have a common interest and exchange a smile or high five.

I’d like to thank the Giants, for giving my little slugger a whole lot of happiness and hope. (Not to mention a couple nights off of “official” reading. Yes, I’m the mom who lets my kid count the captions/tickers/score board he read on the TV screen towards his homework log. Shh.)

And Little, well, hopefully he learns how to say “World Series” — even though it’s over. Either way, he knows the Giants did a very cool thing. And we all came out winners because of them.

Photo: Big’s first trip to the Coca-Cola kid’s park at AT&T stadium. One of our favorite family spots in San Francisco.