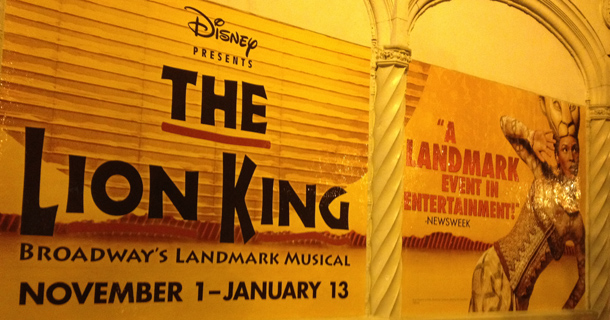 When I was a young lifeguard…

(When she was a young lifeguard…)

Ok, I won’t really break into song. Even in your imaginations I’m guessing my voice isn’t up to par. But, yes, when I was a lifeguard, there was a cute, but rowdy little boy named Alvin. He’d run around the pool (“Walk!”) singing, “Hakuna Matata! What a wonderful phrase!” Then he’d cannon ball into the deep end. I found it hilarious, because he honestly and truly embraced the spirit of the Lion King song and character, Simba. Ever since then, I’ve thought of the Disney animated movie as a rather playful show with really fun, great music.

Well last night, I had the opportunity to experience the story in an entirely different way…many, many years later. I was thrilled to be invited to the SHN Orpheum Theatre in San Francisco to see Disney’s The Lion King — a Broadway musical, along with some other Bay Area bloggers. Our kids were invited as well, but since the show was in the city at 8pm, Lenny and I decided to make it a date night. (Hakuna Matata!)

The event began with a lovely cocktail (and mocktail) reception for our group of bloggers and guests. Then we got the chance to meet and speak to the actors who play the grown Simba (Jelani Remy) and Nala (Syndee Winters). While it was definitely fun for me, it was a real thrill for the little kids who made it out. Come showtime, we took our spectacular seats in the Orchestra section. (I would buy seats in the mid-to-back Orchestra section again…the stage is at a great eye level from there and I wasn’t craning my neck to see at all, even though we were a bit off to the side. Lenny said he would buy them up a bit closer so as not to be under the Balcony.)

I thought the show was breathtaking. The costumes were like a walking art exhibit. The set — which was constantly changing — was awe-inspiring. The acting was truly spectacular. I kept thinking, not only were they singing and dancing, many of them were also puppeteers — moving pieces of their costumes along with their bodies. What, no doubt, required tremendous strength and coordination, looked totally effortless. And the music, which was mostly familiar, took on a life of its own in the theatre.

I found myself loving the show as an adult. I couldn’t get enough of the eye candy, and the powerful music moved me. But I’ll admit, getting a date night with Lenny wasn’t the only reason I was glad we didn’t bring kids.

While the show is intended for ages 6 and up, I know that it would have been far too intense for Big. While he would have been in awe of the costumes and performances (especially some of the sillier Timon and Pumbaa scenes), a good majority of the plot is intense and dark. If your children have lost a loved one and are emotional about it (like Big), this may not be a great fit for them. If your children are the type to get lost in the rhythm of the music and the beauty of movement, without getting too deep into the meaning of it all, no doubt this is the show for them. (Keep in mind it’s a 2 hour 30 minute show, including intermission, so a matinee might be best if you have young kids with you.)

Good news for Bay Area folks, The Lion King will be at the SHN Orpheum Theatre through January 13th, so it could be a great holiday outing for your family. A little shopping, a little culture. (Oh, but don’t leave your jacket in the car. It’s cold in SF in November…even if you were wearing shorts on the Peninsula.) Enjoy the show!

And in case you’re interested in a more thorough review from someone who seems to know more about performing arts than life guarding, here’s a great one written by another attendee. Wanna know what the kiddos thought? Read more from my friends Melissa and Maribel.

Ooh, and there are some other great shows headed to the Orpheum. We still haven’t seen Wicked which just seems wrong, so we’ll have to fix that come January. And for one week only in May, Mary Poppins will be hitting the stage. Check out all the upcoming shows here.

Disclosure: SHN generously hosted the pre-show reception and provided me with two complimentary tickets. I was not required to blog about the evening, and all opinions are my own.