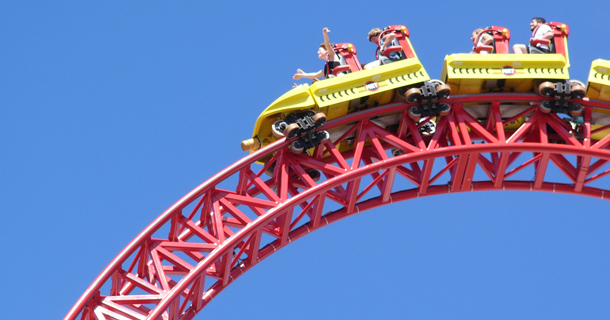 The past week has been a bit of an emotional roller coaster ride for Big. And me. He’s been trying to deal with the stress of school work and evolving friendships. I’ve been trying to figure out the best way to hold his hand, protect his heart, and come to terms with the fact that I can’t control a lot of things in his world. There’s no question that all mothers go through this at some point, but with a kid as intense and sensitive as Big (and a mom with similar characteristics), every emotion is all the more heightened.

Just when I was feeling like we may never make it through to the other side of this phase, something simple, but dramatic happened.

I dropped him off at a birthday party.

I know, it doesn’t sound like much, but two years ago when he went to this same friend’s party, he spent the entire time holding on to my leg. He didn’t talk to anyone, he would barely participate in the fun (and it was an awesome party), and I couldn’t help but wonder how this shy little boy was ever going to come out of his shell.

This time? He didn’t even look back to say goodbye. He was off.

When I got in the car, I couldn’t help but tear up. The stark contrast of two years hit me. At first, I was overcome with relief. Time has been so good to Big’s confidence. I love seeing him jump into the action without looking to me for encouragement. But on the other hand, now that we’re on the other side — the one that seemed impossible — I realize that he doesn’t need me (or want me) in the same way.

(I mean the other day he told me someone in his class sang Puff the Magic Dragon, and he didn’t even cry. Say it ain’t so!)

But he’s still so young. But I’m still his mom. But if I don’t look out for him, who will? But I know I can help him if he’d just listen to me. But…

Yes, I know we’ll get to the other side of this struggle as well. And goodness knows, I’d love to have a happier boy quickly. But I know I’ll also have a more grown up boy when that time comes.

And I’m pretty sure neither of us is ready for that.