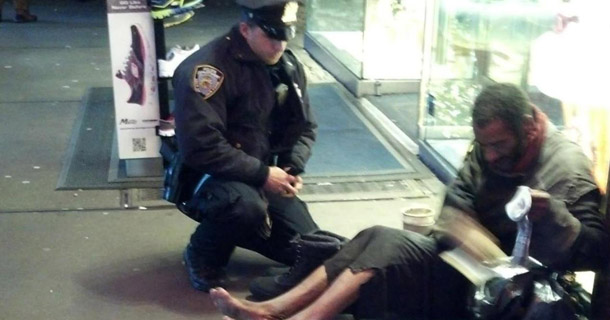 I’ll be honest. I’ve started this post about ten different ways. Not a single one expresses my heartbreak for the families who are suffering so greatly this holiday season. In a way, it feels like focusing on happiness isn’t fair. In another way, it seems like we’re taking life for granted if we don’t. I’m really not sure how to move forward.

I’m not doing this post because of a terrible tragedy that has fallen upon many. I’m writing this because a few weeks ago the picture above went viral. It’s an NYPD officer giving expensive boots to a homeless man on a cold night. A tourist caught the moment of kindness on camera. I stopped counting the number of friends who shared it on Facebook, because it didn’t matter any more. The point was made. People are longing to see and believe in the good of people.

So I started thinking, what news stories made a positive impact on me this year? Which ones made me smile, gave me hope, and made me call the kids to the screen to tell them all about it? Well, here are a few. I hope they bring you joy, hope, and love during this holiday season. 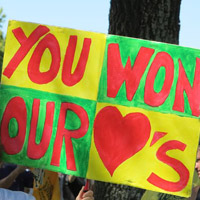 A Little League Home Run
While there was a lot of talk around here about the World Series thanks to the Giants, I was surprised that the only time I heard this Little League World Series story was in passing at the grocery store. (And I can’t find the awesome details someone told me back then online either.) Petaluma, a community north of San Francisco, was home to a team that came just short of making it to the finals of the Little League World Series. As impressive as that is (and I did hear a lot about that), the part that’s really cool is the friendship they formed with a team they competed against from Uganda. The person I spoke to said the Petaluma team couldn’t believe that the Ugandan team had made it so far with gloves and other things that were literally falling apart. They offered to share equipment during the game, but it made a lasting impact on them.

When the boys returned home from their whirlwind tour, Petaluma held a parade in their honor. The team decided to use the venue to raise money and collect gently used equipment to send to the impoverished competition. Then, following the 12- and 13-year-old boys’ lead, the owner of Athletic Edge Batting Cages announced his Petaluma company would be supporting the local team by sending $15,000 worth of equipment to their new friends. You can read more about the team here.

One Rocking Recovery
My friend, Cristie (of Real Life Wellness), has spent more than a year dedicating her days to helping people become stronger and healthier. So when Hurricane Sandy hit her beautiful little beach town—Sea Bright—hard, it was no surprise that she was ready to step up and rebuild. (Even after being without electricity for more than two weeks!) She spent her time driving all over, picking up donations from friends out of town (who even went as far as to buy cleaning supplies, baby food, and other things they thought would be helpful), and delivering them to families who were dealing with the devastation. The people she’s encountered have been humble, gracious, and resilient. It’s no wonder people keep going back to help.

She also shared some cool stories with me about others helping out. (There are more where these came from…)

One girl made a before and after video of Sea Bright that went viral. It included a Train song, and the band decided to jump in and help. They performed a concert for the small town and it will air on VH1 on Christmas, urging people to support Sea Bright Rising. You can read the article and see her documentary here.

Also, a group of Jersey Moms started the Good Day Good Night Bag group. They collected donations of bags for kids with activities and “lovies” for day and night. The bags came fast and furious and the donations went to kids far and wide.

Super Support
It turns out Sandy did some damage in my friend Christina’s area as well (she’s the amazing creator of Project: Underblog). Two-year old Tripp was hit in the head by a falling branch during the storm, and has been in need of major medical intervention. The surrounding communities have come together to support his family, doing things like huge softball games as fundraisers to support his family as they cope with his medical bills. Read more here.

9.6 Ounces of Love
Some of you who know me may remember that my friend, Nicki (of Suddenly Not-So Single Journey), gave birth to one of the world’s smallest surviving babies. Ever. Since Kenna entered the world weighing less than a can of soda, she’s made a huge impact on those around her. Both she and Nicki face each and every challenge with a smile, with strength, and with love. Just this week, Kenna was hospitalized with RSV and pneumonia. But you know what? She’s still smiling. Personally, I’ve been in awe of Nicki. She’s a beautiful writer, a committed mother, a loving wife, and pretty darn funny—even on 1 hour of sleep.

You can read the article about Kenna going home from the hospital here. But what you’ll love even more is reading about her (and other family-focused musings) from her mama’s eyes here.

An Athlete with Heart
My friend Amy (of Trembling Ovaries) shared this story with me a couple weeks ago… Brandon Weeden is a rookie quarterback for the Cleveland Browns. While his stats may not blow you away, his kindness is off the charts. He befriended a little boy who was born with a severe heart condition. They have a bond that is sweet, sincere, and admirable. Gavin, who’s now six, had to fly to San Diego (where his world-class doctor had moved) to have a pacemaker put in two weeks before the draft. But that didn’t stop him from being by Brandon’s side as he got the news he’d made it to the NFL. Brandon, seeing his buddy suffer, started a foundation in partnership with Oklahoma City’s Children’s hospital to fund a grant that will bring a world-class heart surgeon to their hospital. Not just for Gavin, but for all the kids who need it.

When asked why he wanted to be Brandon for Halloween, Gavin answered, “Because he’s a really good quarterback, but he’s a better friend.”

See the whole story here. And you can continue to follow Gavin’s progress on his mom’s blog here.

3 Cheers for Kindness
Though I don’t watch many late-night news stories, I caught this one and I couldn’t help but cheer right along with the kids in the video. A nine-year-old boy, Matt, who suffers from a form of cerebral palsy decided he wanted to participate in his school’s Field Day Race. That alone is awesome. He’s proof that our minds can be just as powerful—if not more so—than our bodies. But watching the video, well, I couldn’t help but love his classmates too. As I’ve mentioned before, I’m such a fan of inclusion and the compassion it teaches our kids.

Watch for yourself here.

What was your favorite feel-good story of 2012? If you want to see even more cool pics, click here for a great slideshow of moments that restored our faith in humanity on BuzzFeed. And like Be Good to People on Facebook to hear these kinds of stories on a regular basis.