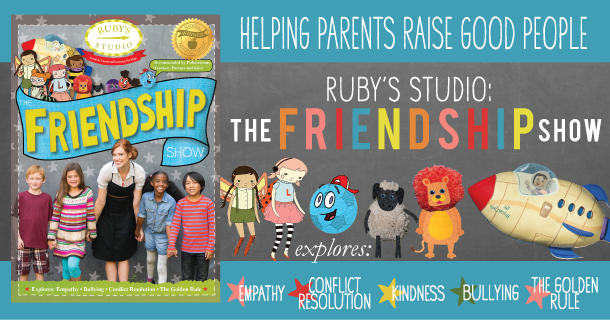 As I mentioned last week, I’m thrilled to be working with The Mother Company. And, Ruby’s Studio: The Friendship Show—their latest dive into the world of children’s programming—is yet another example of their excellence in helping parents raise good little people. Let me explain…

Little. He’s a funny one. While he’s active and chatty with people he knows (and he has many good friends), he’s very quiet in new situations. He’s not really shy, and he doesn’t mean to be rude, he just goes silent. The last time I was co-oping in his preschool class, I witnessed this:

I’ve been trying to figure out where things were going wrong. Why does a kid who’s so friendly, enthusiastic, and full of life in some settings, become the exact opposite elsewhere?

Well, I had him watch Ruby’s Studio: The Friendship Show last week on a quiet morning while Pink was napping. When it was over, I asked him if he liked it. His reply? “Can I watch it again?!” I’ll take that as a yes. (Though I gave him a no.) I asked him some questions about what he saw and how he might handle a situation or two based on what he learned about The Golden Rule. He seemed to get it. But would he apply it?

Well, on Sunday, we were driving to a birthday party where he didn’t know many of the kids well. I reminded him about The Golden Rule and some of the other lessons he learned watching the show. Instead of ignoring me, he seemed to be really tuned in to planning ahead for how to act around new friends.

We walked in the door, and he quickly disappeared. Though he asked me to stay at the party, he didn’t come talk to me or ask me for help the entire time. He laughed and played with the other kids non-stop. When the clown showed up, he sat front and center, totally engaged with the show and the kids around him. Magic.

Maybe I’d taken for granted that he knew how to act. That he knew what to say. After all, I’m always prodding him, reminding him what to say in certain situations. But somehow, somebody else telling him in ways that made perfect sense to a preschooler, made all the difference.

Don’t get me wrong, he still has his quiet moments (in fact, I reminded him of some of the show’s great moments this morning at preschool drop off), but as a mom, I’m so grateful that I have a go-to tool that I can use to help him along the way.

And you can bet Big will be watching this soon too. (Though he’s almost 7, he still gets a lot out of Ruby’s Studio: The Feelings Show.)

Do you think your little one (~ages 3-6) could use help with some aspect of friendship? Bullying? Empathy? Conflict resolution? Leave a comment (by 12pm PST on Friday, February 1, 2o13) for a chance to win a free download of Ruby’s Studio: The Friendship Show. If you can’t wait, or don’t win, you can download it or buy the DVD in the Ruby’s Studio online store or on Amazon.

Disclosure: I was given a free download of Ruby’s Studio: The Friendship Show for review purposes. All opinions are my own.