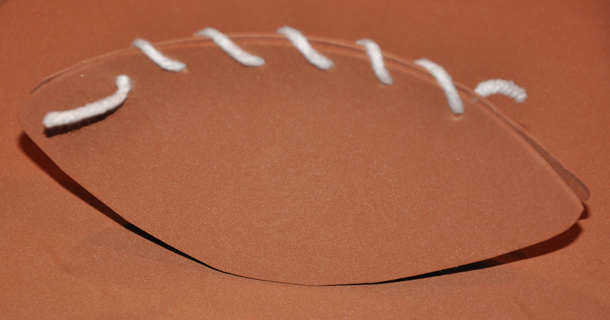 Ok, it’s true, I don’t DIY. Most of the time. But last year, come Valentine’s Day, Big’s teacher insisted on homemade valentines with no candy. While I liked the idea in spirit, I was desperate. I was newly in love with Pinterest (before she made me look like a fool), and searched like crazy for boy friendly Valentine’s ideas. There were some fun superhero ones, but Big really wanted to make footballs.

So, I risked my sanity and my children’s safety, and headed to the local craft store. After some shopping, here’s what we came up with — something that was actually kind of cool. (Cool enough for me to Pin, that is.) Please note, this was the sample one I made the night before we embarked on the adventure together. As a kindergartener with a short attention span and a bizarre disregard for following traced lines, his did not look much like this. But I accidentally (sort of) forgot to take a picture.

Here’s how I suggest making them (some of which we actually did):

1) Trace a mini football on heavy stock paper/thin cardboard to create the template. If you don’t have one, come borrow one of the 3, 256 we have. Cut out the template, then trace it onto the foam sheets. (You’ll need 2 footballs per Valentine.)

2) Have your child cut out all the footballs. (This may require you to have a glass of wine of three so that you’re not cringing at the horrifically jagged edges that result.)

3) Have your child write notes on the bottom 1/2 of the footballs (in case their eager stitches sneak further down than mine did). If they want to get creative (which Big absolutely did not want to do), they can write things like, “You’re a winner!” or “I scored having you for a friend.” or “You’re a catch!” (The wine may help you here…I’m drinking decaf tea as I write this.)

4) Help your child thread the needle, then let them stitch a few stitches along the top of a “cover” football and a football with a note on it. (Big wrote his after they were stitched and it was a bit tricky. Actually being left handed and using smeary pens is tricky no matter what…)

5) Send ’em off to school and hope that the class recognizes them as footballs, not another unfriendly brown object.