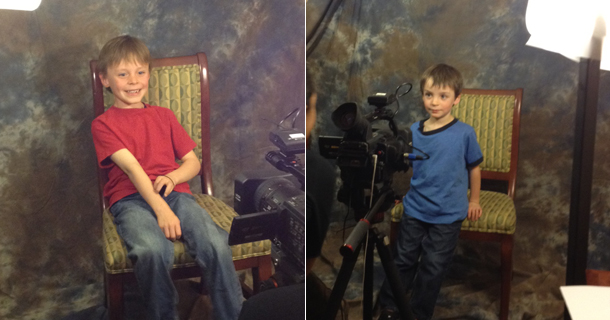 A couple weeks ago, I got an email from a lovely casting director. She found me through my blog (which, apparently, is the new way to get discovered), and was hoping to have my boys audition for a new (still secret) TV show that will be taping in San Francisco. (I’m guessing she was inspired by my Broadway musical.) I know my boys though, so I laughed. But then I realized that they’ve really been wanting to be on TV, so maybe I should actually give the audition a go.

I should back up. You see, way back in November, a producer for World News with Diane Sawyer called me and wanted to profile our family in a Christmas shopping story. (Oh the power of a blog and Jenny Lee‘s awesome photograph on my Facebook page!) We had multiple, in-depth calls. Scheduled a date. Which, of course, called for new haircuts and wardrobe. Only to have the date postponed due to something more important in the world than our family’s holiday shopping. (Hard to believe, I know.) Then, come mid-December, the Newtown crisis took place, and the producer said he wouldn’t be making it out here after all. While I certainly understood, the kids have been asking when they’re going to be on TV ever since.

Who was I to deny them their precious 15 minutes?

So, I scheduled the audition for 4:30pm on a Friday. If you have kids, you know what 4:30pm on a Friday looks like. Not my smartest move. I also didn’t really explain that it was an audition (I told them this woman would be interviewing them because her company wanted to know what little boys think about a topic), because if they didn’t get on TV, I didn’t want them to be doubly disappointed. Flawed logic? Yes. But, again, this was 4:30pm on a Friday.

I got my stage mom game face on, forced (and I mean forced) the boys out of their sweat pants and into jeans and TV friendly solids, and strapped them in the car. Their agent Pink came along for the ride too.

About 25 minutes into our 20-minute drive, this is was the scene: 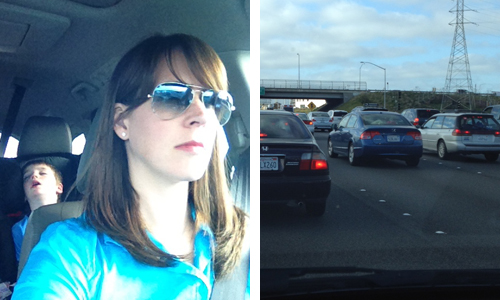 An uptight mom, a passed out leading man, and bumper-to-bumper traffic. How Hollywood, right?

We rushed and rushed to get there just in the nick of time — only to discover that things were running behind. (Way behind in 3-kids-on-a-Friday-afternoon time.) We spent the next half hour making friends in the lobby and seeing how close we could come to falling into the koi pond. (Close, it turns out. Very close.) 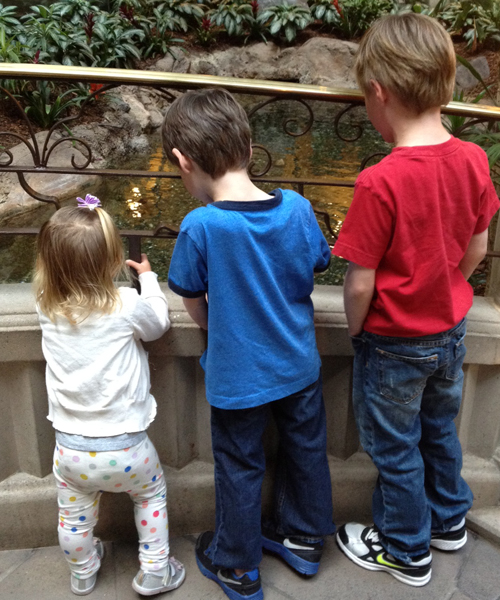 We headed into the suite where she’d be doing the on-camera interviews and she playfully started by asking the boys to draw pictures — you know, to break the ice. (She was one smart cookie.) Well, you can imagine who was most interested in this activity. Yes, Pink. She worked her way in, grabbed all the paper and emptied the crayons. 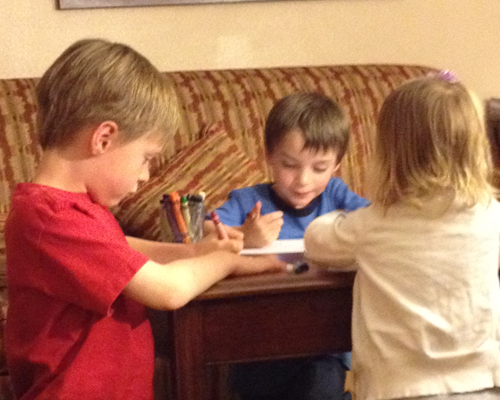 As the boys finally worked around their sister, they pointed out that someone took a bite out of the blue — Pink’s signature move. You have no idea the relief that washed over me when the casting gal confirmed that someone at a previous audition had indeed done that. (One win for the day, at least.)

The first artist to announce that he had no idea what he had  drawn (and certainly didn’t complete the assignment)? Little. He took to the “stage” and got ready to wow her. 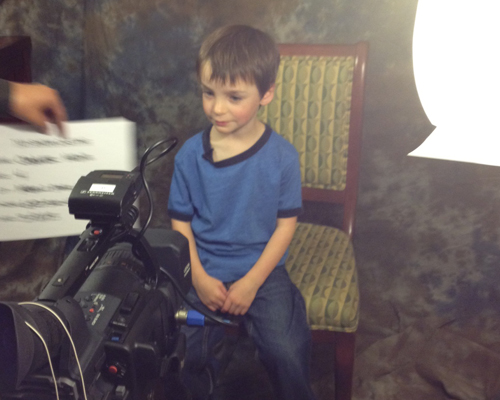 Known for his dramatic flare and imagination, Little decided to play the role serious. As he finally warmed up, and was getting into a groove, Big started randomly wandering around the room. Since Little was on camera, we couldn’t talk, so he mouthed, “I have to go pee!”

I found a door, opened it, and to my surprise, it wasn’t a bathroom. It was the casting director’s bedroom filled with all her personal belongings. But we’d gone this far, so I just sent him into her bathroom too. A minute later, the sound of a flush filled the room (and the mic, no doubt) and he returned. About 30 seconds later, he popped up again and mouthed, “Poop!” to me. He ran back in her room and came back a couple minutes later (I’m afraid I can’t confirm that I heard a flush this time) — feeling a bit lighter and ready for his turn.

As I apologized profusely for Big’s use of her personal space, I noticed a dirty diaper scent filling the room. At the same time, Little started yanking on my leg saying he had to go to the bathroom too. She patiently directed us to the public restroom in the lobby. At this point, I couldn’t help but think that, in spite of things, I was actually keeping my cool. Until I realized that I looked like this: 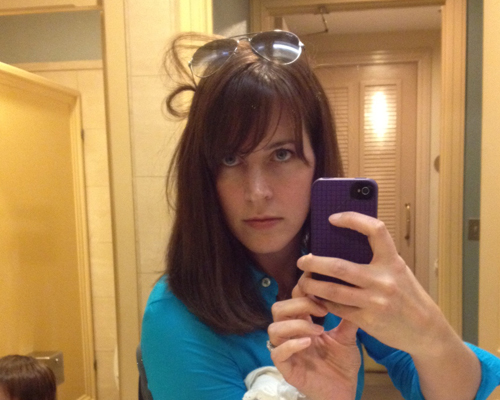 We ran back upstairs to find Big really engaged in his interview and having a great time. For about two minutes. Then, it looked a bit more like this: 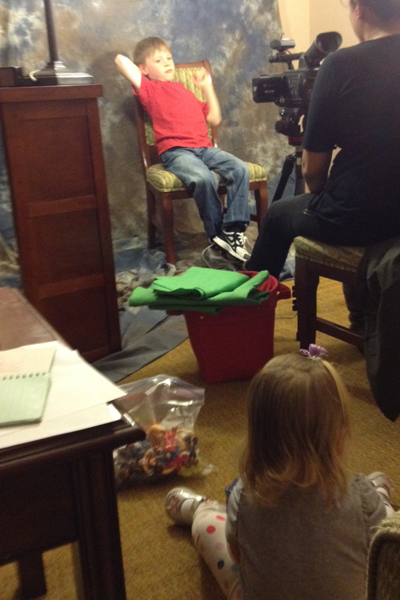 And sounded a bit more like, “Nack! Nack! Noooo! Up n dow, up n dow!” Yes, Pink was trying to steal the spotlight. Again.

Once Big was all done, we started packing up our stuff to head home. As we did, I apologized to the casting agent (who fortunately had a good sense of humor about it all) — again — for us going in her room and bathroom. Then she told me a bit more about the show and next steps. While she didn’t say it, say it, I’m pretty sure she was about to bust out with, “Don’t call us, we’ll call you.”

But she didn’t get the chance. Because Little shouted out — right at that very moment, “It smells like someone farted in here. Because I did!”

It’s crazy, we haven’t heard a thing. Maybe we will. Probably we won’t. But either way, I’m totally blaming the boys’ agent, Pink, for going in with far too many demands.