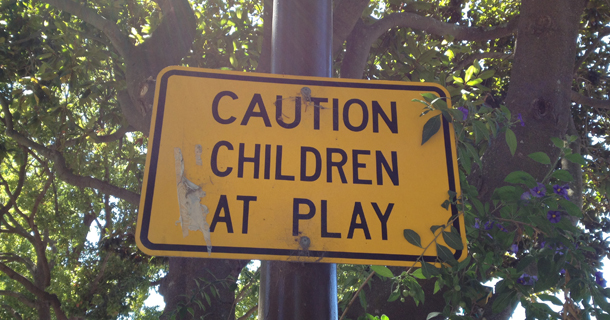 This past Sunday in the NY Times Op Ed section, there was an article called A Childless Bystander’s Baffled Hymn. Marcia Kemp Sterling, author of One Summer in Arkansas, sent it to me as food for thought. (I love when readers do that!) Honestly, it was a well-written, well thought out piece about how modern parenting is a rather ridiculous.

The author, Frank Bruni, starts by criticizing parenting vocabulary. (I see his point. Because, honestly, when did “this is your last chance” actually work for any of us? Those little buggers are smarter than we give them credit for.) He criticizes the idea of giving kids choices like what to wear:

“But they’re also not adults, so why this whole school of thought that they should be treated as if they are, long before they can perform such basic tasks of civilization as driving, say, or decanting?”

(I’m guessing he saw Little walking down the street in a UCLA football jersey, green and black athletic shorts, navy blue socks pulled up to his knees, and his brother’s hand-me-down shoes that don’t really fit as his inspiration for that one.)

He goes on to criticize all the fretting. Oh, the fretting. (But in my case, the fretting is a bit less after seven years. And not because of Jessica Alba’s book or Gywneth Paltrow’s website. Progress, my friends. Progress.) Next up? Praise. (Frankly, my kids could probably use a bit more. I’m old school like that.)

The article goes on to discuss power struggles, a democratic approach turning into a lack of control, and inconsistent technology monitoring. His conclusion? That the kids he’s observed have all basically turned out to be the same, but more articulate versions of themselves from the time they were born — no matter how they were parented. He argues that parents may impact etiquette and clean rooms, but nature gets its way. Parents should cut themselves some slack.

Yes, we should. We really, really should. As I read this article, I cheered him on. I thought, yes! You’re right! This is totally logical.

BUT…in the middle of the article, there are a couple of really insightful sentences:

“When you love people, really love them, you do everything you can to protect and help them. To give them a leg up. And in a world in which the competition grows ever crueler and the jockeying for advantage more intense, parents feel it’s more incumbent on them than ever to leave no stone unturned and to play an error-free game. They walk on eggshells and torment themselves.”

And, Frank, this is where I’d like to unbaffle you. (Though I’m pretty sure you already get it based on that excerpt.)

Parenting isn’t entirely logical. It’s the most emotional undertaking I’ve ever experienced. As more and more information is available, we can find a point and counterpoint to each and every choice we make. In an effort to convince ourselves that our choices are right, we unwittingly (most times) make others feel like their choices are wrong.

And parenting isn’t a job like writing an article. We can’t go back and edit a word here or there, omit an entire paragraph. While it’s so true that one false step won’t hurt our children, when we take about 1000 steps a day, how do we ensure they’re in the right direction? Because while our children may be born with very strong natures, isn’t it our responsibility to help them find a path in life that honors that (without making our living rooms look like a tornado hit)?

You ask why we give our kids choices before they get driver’s licenses. Well, because when they do get behind the wheel (or in front of a red cup), we want them to have an inner compass guiding them. After all, the last distraction they need at that point is calling Mom on their precious iPhones for help.

So, yeah, maybe I shouldn’t let my 4-year old dress like a mix between a homeless person and a wannebe NBA player. Goodness knows my pictures would be a heck of a lot cuter. But it’s his nature. He wakes up knowing exactly what he wants to present to the world. And I think that’s cool. My 7-year old? It’s his nature to have an explosive breakdown over the pressure of a choice. So when he gets to decide if he wants cereal or toast for breakfast, it’s about building confidence in his ability to make decisions. Believe it or not, there really are good reasons for why parents do things the way we do. (Well, most of them.)

Oh, I get it. I really do. When you don’t have kids these sound like excuses. Believe me, I was on your team. But now I’m on my kids’ team. And I’ll do whatever it takes to be a good mom to them. Even if it looks ridiculous to people who haven’t walked in my flip flops. (But I promise to try to stop using “last time”. Promise.)