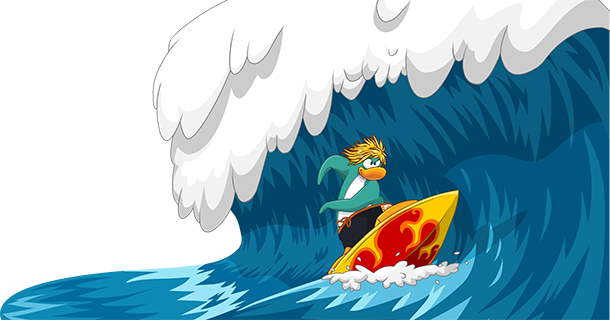 I remember being kind of freaked out when Big came home from kindergarten last year saying he played games on the computer at school. Sure, they were educational, but did 5- and 6-year olds really need to be exposed to that kind of screen time? After a couple days at Club Penguin headquarters — where I heard from online safety experts, the executive team, and other tech bloggers — I’m now realizing the answer is yes.

Our kids live in a digital world, whether we like it or not. I know 4th graders who do all their schoolwork on their own laptops. Big’s friends are cruising around town with iTouches. Kids everywhere see their parents using smart phones, laptops, iPads, and more. The reality isn’t in the future, it’s now. And it’s our job as parents to give our children the tools to not only live in a digital world, but to thrive in it. (You know, long before they start navigating YouTube and Facebook.)

After spending a couple days with the folks at Club Penguin, I can confidently say I think it’s a great starting point — “training wheels” if you will — for online play. Here are the things I was thrilled to learn as a parent of an online newbie.

Club Penguin is All About the Kids
As I mentioned in my last post, the team at Club Penguin is extremely focused on providing kids a safe environment to socialize, role play, express themselves, and have fun. But they didn’t just say that. They proved it. Read on…

Safety First
Ok, I know I said the kids come first. And they do. Which is why safety is so very important. Here are just a few examples.

• Global human moderation- Their team of moderators is constantly in play — enforcing the simple, but effective rules of Club Penguin, and encouraging positive interaction within the Club Penguin world. And what if someone breaks the rules? (They’re kids, of course they’re testing the limits.) Club Penguin has the ability to let them know right then and there — in the moment. The moderators give 24-hour, 72-hour, and permanent bans as they see fit.

• Linguistic Genius- I took a snoozer of a linguistics course in college, but at Club Penguin, I could have listened to their specialist for hours. Not only do they have filters that screen for things like swear words, bullying talk, or sharing of personal information, their team is also constantly studying pop culture. They constantly adjust the filters so that words (or combination of words) which are typically innocent, but now represent something not-so innocent, are not in play. And they also know kids are clever, so there are tons of combinations that aren’t allowed. (Think: “You are a beach.”) See? Genius.

• Their Chief Safety Officer is a father of young kids, and former police officer. He’s seen what can go wrong with kids online first hand, and he’s there to be sure Club Penguin is the safest it can possibly be. Though it’s extremely rare, if the moderation team senses there might be a child in real danger (threatening suicide, for instance), his team works with authorities to check on the situation in real life and provide the proper support for the child and parents. They have literally saved lives.

Club Penguin has a number of safety partners (more to come on that in a future post), and together they train 100,000 parents/teachers in online safety annually. Impressive and important.

Parental Control – Parents Page and Facebook App
When your kid has a Club Penguin account, you can go to the Parents page to set up your own account and manage/monitor their engagement. Here are some things to pay attention to:

Safe Chat
Club Penguin provides the most advanced safe chat out there, and parents can select from two types of chat. Ultimate Safe Chat is great for young kids. They can only choose from a menu of predetermined phrases. This ensures they are engaging in positive play and doesn’t require typing skills. 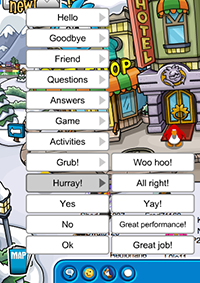 Standard Safe Chat allows kids to type into the chat box themselves. There’s a huge number of pre-approved words/phrases to give the kids the opportunity to express themselves, but there are also limits. For instance, they can’t use numbers or characters, which prevents accidental sharing of personally identifiable information and work-arounds for bad language. One really cool feature: when your child starts typing, the tool steers the conversation to white-listed terms by offering up various popular words or phrases they may be attempting to type. This not only promotes positive choices, it helps kids with word recognition, and allows them to “type” much faster by selecting the suggested words or phrases.

Timer
No more nagging your kids that they have “2 more minutes”. Club Penguin will do that for you. You can decide what hours of the day your children are allowed to play, as well as how long they’re allowed on the site. Kids get a warning that time is running out, and at the end, there’s a countdown so they aren’t surprised. (Disappointed, perhaps, but not surprised.)

Ban History
Check in to see if your child is testing the limits — and how. If you’re concerned, you can contact Club Penguin to get a better understanding of what your child was doing that was considered inappropriate play.

Facebook Disney Parents App
Since parents tend to spend more time on Facebook than Club Penguin, they’ve created a Facebook App where you can check in on your child’s account. This app gives you the opportunity to send your little penguin a postcard with an in-game reward (maybe they aced their report card, or did something nice for a sibling). It also shows you what games and activities your child is engaging in, and gives you conversation starters so you can talk to your kid about their Club Penguin experience. I love that! 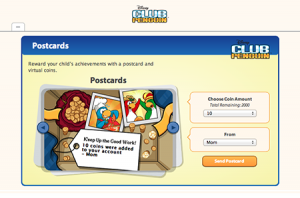 The team admitted that most parents don’t take advantage of the really cool tools Club Penguin offers them. I really encourage you to check out each of these and figure out what’s important to you as a parent. This is your chance to help your child get off on the right foot when it comes to online interactions.

Expressivity
Honestly, I wasn’t sure if this was a word, but it was used a lot around Club Penguin. Now I’m trying to use it in everyday conversation because I love its, well, expressivity. Here are a couple examples of things I thought were cool.

• With over 40 places to play, new content weekly, monthly parties (the Marvel party kicks off TODAY!), a huge assortment of clothes, accessories, etc., and multiple servers with different things happening in the same space, kids can really let their imaginations run wild.

• Being able to role play is a really important feature for kids in this age range. Not only can they pretend to be something outlandish like a pizza, they can also pretend to be something they aspire to be in real life. Kids can explore their nurturing side by taking care of their puffles, their adventurous side by becoming a superhero, and their sensitive side by taking action to help (like inviting others to sing along to the National Anthem in support of the Boston Marathon victims — yes, things like this really happen all the time). The possibilities are endless.

• And some fun, breaking news… While we were up there, we got a sneak peek of the iPad app they’re about to release. It’s yet another thing penguins and their parents can look forward to.

Big and I are gearing up for the Marvel party (though baseball season is definitely not allowing for much Club Penguin fun right now). We hope to see you there!

Do you let your kids play Club Penguin? What do you like best? What are your concerns? I’d love to hear from you!

Club Penguin art courtesy of Disney Club Penguin.
Disclosure: Club Penguin hosted my trip to Kelowna for the first-ever Club Penguin Media Summit. I was not compensated for this post, and all opinions are my own.