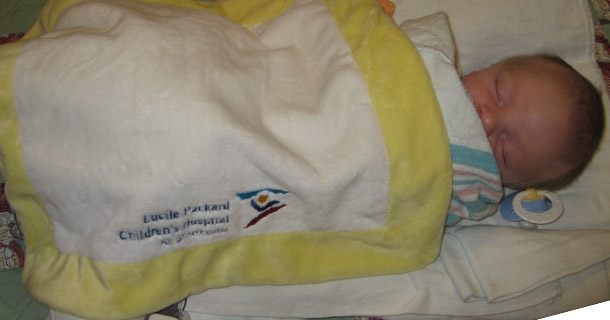 When Little was 10 days old, I took him to the pediatrician for his 2-week check up. He had a cold thanks to his big brother’s preschool germs, and I was happy to check in and get the a-ok from our doctor. But I didn’t.

Within about 2 minutes of being there, she asked me where Lenny was. On a plane, returning from a business trip. Then she asked where Big was. Asleep at home — a neighbor volunteered to come over for a few minutes so I could run out without waking him. I got the feeling the next thing she said wasn’t going to be good. I was right.

She told me I needed to go straight to the ER and get Little admitted to Lucille Packard Children’s Hospital (at Stanford). His oxygen levels were extremely low and he needed intervention. I vividly remember the drive, the calls, the metal detectors, and the fear. After being diagnosed with RSV and a kidney infection, we settled in for a week of being frazzled by machine alarms, sleeping in chairs, and wondering when our baby would come home.

My lovely friend reached out to me to let me know that her other friend had just set up shop in the NICU with her baby boy, too. While it was scary to see someone else I knew going through a hard time, it was such a relief to have a friendly face. We both made it through our challenges and — fast forward 4 years — those two sick little babies are now big, strong preschool buddies.

That situation actually made a real impression on my friend. Seeing two moms she loved taking care of babies in the NICU lit a fire in her. She joined a wonderful organization — Circle of Friends — and is now on the board. This philanthropic group raises money and volunteers time to help families in need who come seeking world-class medical attention at LPCH for their sick children.

Each year, the organization holds a fundraiser — Lunch and Learn — with guest speakers. Last year, I got the chance to meet my writing idol, Kelly Corrigan. This year, Gloria Feldt — women’s rights advocate and author of the book No Excuses: 9 Ways Women Can Change How We Think About Power — was the keynote speaker. I couldn’t wait to hear from her — I absolutely love these types of events. I love hearing different perspectives on life, work, family, etc. and figuring out where my values fit into the speaker’s message. (Yes, I even took notes.)

Gloria Feldt titled her talk The Power TO of YOU: Women Taking Action Together for Good. Here were a few of the nuggets:

• Women are 57% of college graduates, 50% of the work force, and 18% of the executives. Women make up 54% of the voting population, but only 18% of Congress. Women buy 85% of consumer goods, and make up only 15% of the board decision makers who create the products.

• When men have extra time and money, they tend to start a business or run for office. In general, women have the ambition to do it, but they lack the interest in that kind of power. In fact women are half as likely to even consider running for office as men.

• Women can use their power to take action for good — in business, politics, and our communities. And if we do, brains will be the driver for progress rather than brawn.

Ms. Feldt was lovely about honoring the work that Circle of Friends does to support families in need. She even shared a touching story about her brother dying of childhood cancer, and how much her family would have benefited from the support of an organization like this. She celebrated the fact that women are dedicating themselves to service and using their power to make a difference in communities.

But while listening to her talk, I couldn’t help but wonder how things would be different if the women sitting in the room — women who have started charitable foundations, women who have chosen flexible jobs to afford themselves more time with family (or no jobs at all, including the pediatrician who sent us to the ER years ago), and women who have started their own small businesses — had decided instead to climb to the top in the corporate world or politics to alter the statistics she mentioned.

Honestly, I think it’s pretty amazing that highly educated, motivated women are opting out of the traditional work force to volunteer their resources — time, money, ideas — to community organizations like schools, charities, and mom-focused businesses. If these women were in Washington, D.C. or Silicon Valley board rooms (where I believe they could absolutely hold their own), would they still touch lives? Or would they be caught up in gridlock? Frustrated by endless meeting schedules? (Or was that just me when I was in the corporate world?)

I keep coming back to this point:

While we’re redefining “power”, maybe we should also redefine “success”. Will women truly only be equal to men when we’re 50% of board room and Congress roll call? I’d love to know the percentages of women in the volunteer/community space. I bet it’s pretty darn impressive. Yet men aren’t holding conferences and writing books to point out that there’s a lack of balance in the world of community service.

No doubt there’s still work to be done on wage fairness and other issues of women’s rights. But I believe women already do have great power. And, yes, it’s the power to.

Until we allow ourselves to celebrate each of those uses of power as success, well, we absolutely will lack power. Yes, until we agree to lift each other up, we’ll keep tearing each other down with doubt. And that, too, is a choice we have the power to influence.

Should you be looking for a way to unleash your power, I encourage you to learn more about Circle of Friends. They’re a wonderful group doing truly special work to enhance a world-class medical and research institute right in our (peninsula) backyard.