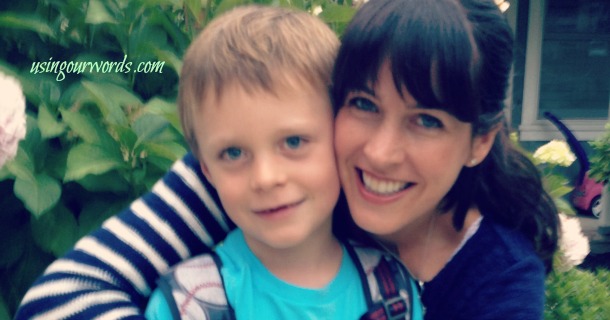 This is the third year in a row I’ve helped Big get ready for elementary school to start. I’ve bought and packed lunch boxes, prepared his bus pass, put out clothes we can both tolerate, taken too many pictures of his back at the bus stop, raced to the school to meet him, and watched him walk away with a virtual stranger into a new year.

You think it will get easier. And it does. A little.

But a new school year is a big deal. My little boy walked into that classroom today filled with 7-and -5-month-old-kid knowledge. He walked in with a huge gap where his two front teeth should be. He walked in tentative — so much so that he made me check his temperature because he was sure he was too sick to go to school. He walked in with some of his closest friends, and some kids I’d never even seen before. He walked in sort of ready to start 2nd grade.

I know it won’t be long — maybe just a few weeks even — before he starts telling me all the stuff he’s already learned. Stuff like who sits together at lunch, what day PE is, and that multiplication isn’t so hard after all. He’ll wake up excited that it’s library day because his friend discovered a great new series over the summer and now he wants to read it too. Until he doesn’t. He’ll start saying unfamiliar names casually in conversation. That gap in his mouth will be filled with big, adult teeth and he’ll be using words and phrases I’m sure I didn’t know until I was much older.

I’ll be saying things like, “Where did the year go?” “How has he gotten so big so fast?” “Who’s Alisa?” “New shoes? Again?” And, of course, the wonder-filled, “How did you get so smart?” In my heart, I’ll know the answer to this one. It’s because I let go. A little bit more.

Yes, I love watching my boy grow, but on days like today, it sure is bittersweet.

How are you doing as your little ones head back to school?