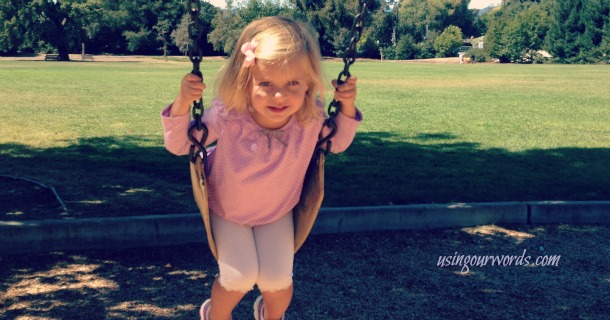 As a parent, each baby and toddler milestone is a complete thrill. That’s why all those automated weekly update emails are so gosh-darn popular. Parents can’t get enough of the anticipation and celebration of what comes next. And let’s be honest. Beyond the delight, there’s a bit of relief that comes with each big moment. You know, that phew-my-kid-is-ok feeling?

Well, that is unless your kid isn’t ok. Watching the milestone window come and go can be torture for parents whose children aren’t meeting the mark. No matter what people say.

I know. I’ve been there.

You may recall, awhile back, Pink was diagnosed with a gross motor delay. What has that meant to us? About 3 gazillion doctor’s appointments, 1 million tests, 200 thousand theories, and a whole lot of stress. (Ok, maybe it wasn’t that many…I’ve been spending a lot of time with huge-number-lovin’ Little lately.) What does that mean to you? She’s been cautious and slow when it comes to physical milestones — walking, climbing, jumping, rolling, etc.

Now, a year plus into her game of “catch up”, she’s doing really, really well. People are constantly saying they can’t even tell she’s had a hard time. And we do see great progress. Her physical therapist is one of her favorite people and she knows exactly what Pink needs. A few minutes into playing on the stairs or kicking red cup pyramids and that girl is huffing and puffing — while smiling. Plus, having an entire summer of chasing two big brothers all over California was kind of like going to gross motor boot camp.

And now, as my little girl is able to use her hard-earned strength to do amazing things, I’m finding myself in the position all parents are in come a baby or toddler milestone. Wait? I wanted this?!

The second I mention a hairbrush, Pink can — and does — run those little legs faster than I say “detangler” into the living room, maneuvering her squishy body into the tiniest hiding places in our house.

It used to be that she’d watch her brothers running through the house and she’d scream with frustration that she couldn’t keep up. Now? She’s still screaming, but mostly with delight. Because that’s what little sisters do when their big brothers chase them.

When she wanted water, there used to be a whole lot of whining and begging. Now there’s a whole lot of finding her standing on the kitchen counter to reach that day’s water bottle of choice.

Swinging used to send both of us into a frenzy of terror. Now? “Higher! Higher!” And not on the baby swing. (Gulp.)

Yesterday, though, was perhaps my biggest oh-no moment of all. Pink’s been talking and talking about doing yoga (not sure where this madness came from) and she got me to go to a yoga class. (Bigger gulp.) Ok, it was a light Mommy & Me version of yoga, but still. I’m not zen (or flexible). I tried for years and years to be all yoga-y. Unsuccessfully. But I figured going to this class run by my friend was worth a shot — for both of us.

And, as I watched Pink trying — really trying — to balance on one foot in tree pose, I couldn’t help but feel…well, zen. In that moment, I knew. The counter climbing and running away and toddler chaos, it was all leading to this sweet feeling of triumph. So it turns out that the answer is yes, this is exactly what I’ve been wanting.

Pink’s time to shine is here.