Reader Feature: Erin’s Family Does Dress Up (Like No Other)

You guys. This family (Erin, Brian, Jack, and Sam) — who I had the pleasure of getting to know during my good ol’ Yahoo! days — couldn’t be more fun. Seriously, by the end of this, you’re going to be begging me for Erin’s phone number. Because who wouldn’t want to hang out with this kind of awesome — all. year. long. Dress up is for Halloween? Well of course. But why not embrace it on every holiday in between, and beyond? You just might after hearing from Erin. Here goes…

There are some families who might all come together and get dressed up for Halloween. We are not that family. We are the crazy neighbors who seem to thematically dress up for all holidays. I luckily have a wonderful husband who plays along and has a passion for photography, and two boys who are willing to pose for M&M’s. As the boys are now a little bit older — 6 and 4 and half (the half matters) — they are into family dress up, and their Halloween costumes, for this year, had to include characters that the whole family could rally around. Here are some of our Halloween shots of the past, plus some of our favorite other holiday shenanigans.

The Weather
We bought the rainbow costume but the rest we made. The boys costumes were made out of felt and cut up sweatshirts, and the rain was a table skirt taped to an umbrella. 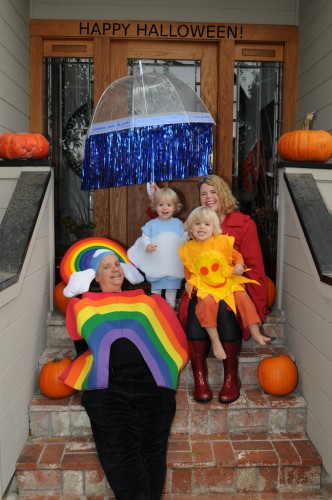 Special Delivery
My oldest was obsessed with the package man. This guy was better than Santa, he brought packages all the time (darn you Amazon Prime). I found him a UPS costume and that became our theme for the year. The rest of the family was outfitted by eBay. The cutest thing would happen once he got his UPS costume. Whenever he heard the screech of the package truck he would grab his hat and run to the door to see his idol. 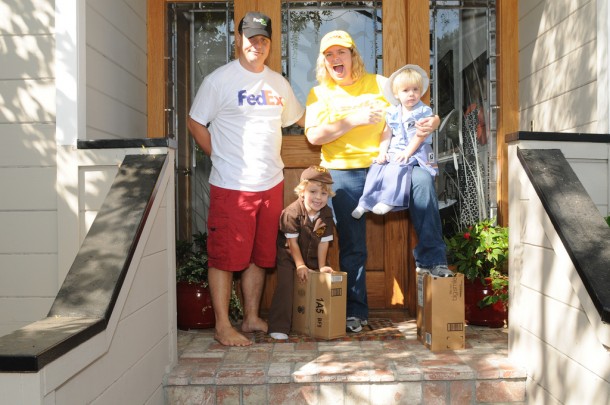 Heroic Halloween
The boys wanted to be superheros, end of story. My husband was not up for anything spandex, and I was a little leery too, but I must say, dressing up in a cape and mask gives you super powers. I love how my little Flash is emulating his dad. We had fun running around my old high school for this shot with our tri-pod and remote. 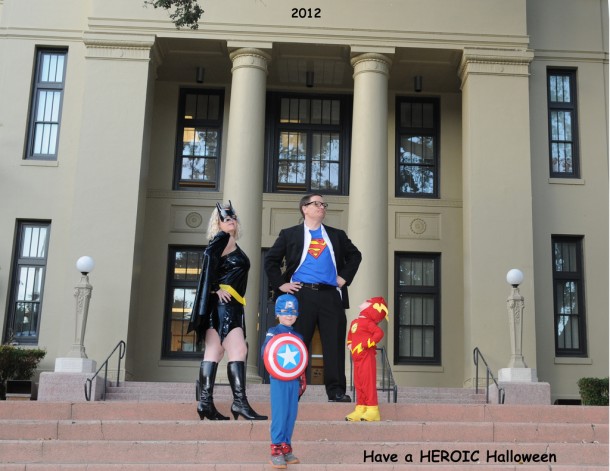 “Samta” and the Elves
I’ve had this idea for years and finally last year I was able to pull it off. Sam loved his Samta suit so much he wore it Grandma’s house for xmas eve dinner. The adult elf suits are actually jammies. 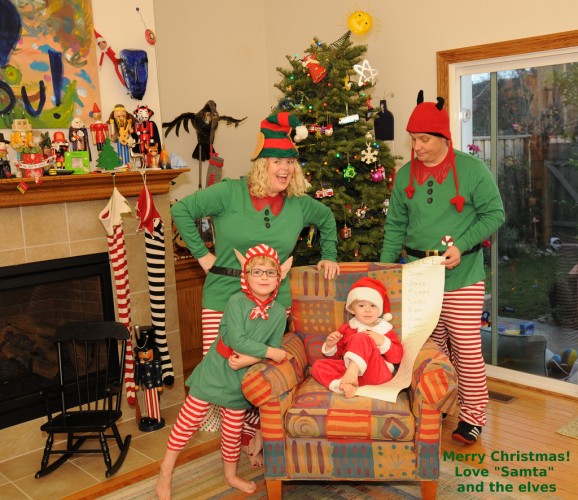 Independence
This was idea was born out of a Christmas gift. Yep, that’s a Snuggie — and it perfectly resembles Lady Liberty. 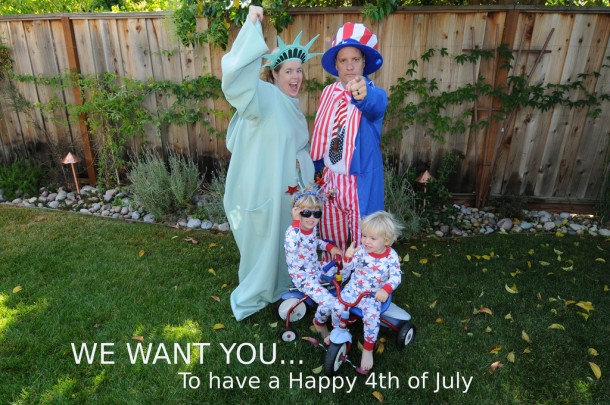 Honest Abe
One hat to honor our presidents. 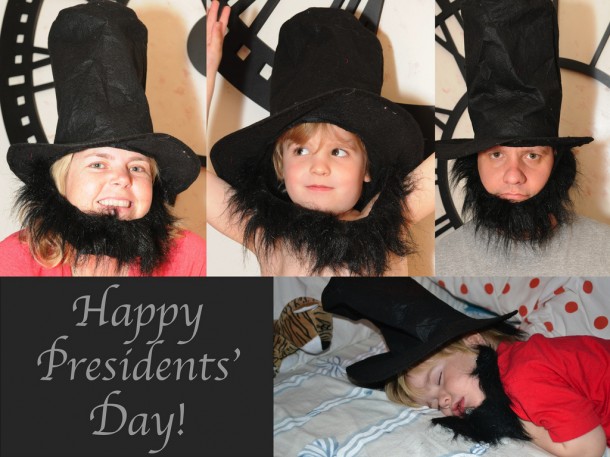 It’s Ok, We’re Irish
While it may not be PC to measure your children in Guiness, it makes for a great holiday photo moment. 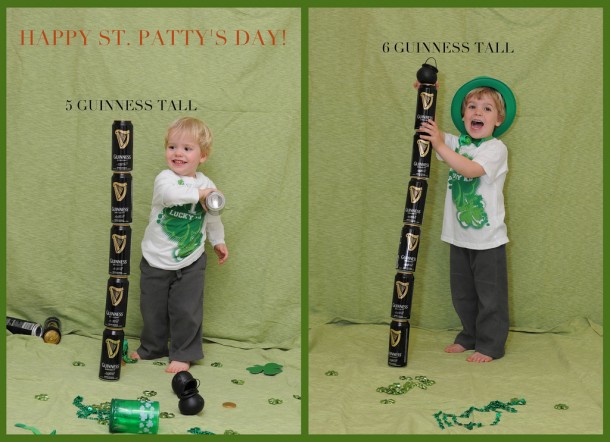 6 More Weeks of Winter
Some of our getups require no costumes at all.  Just a little sun to celebrate Punxsutawney Phil. 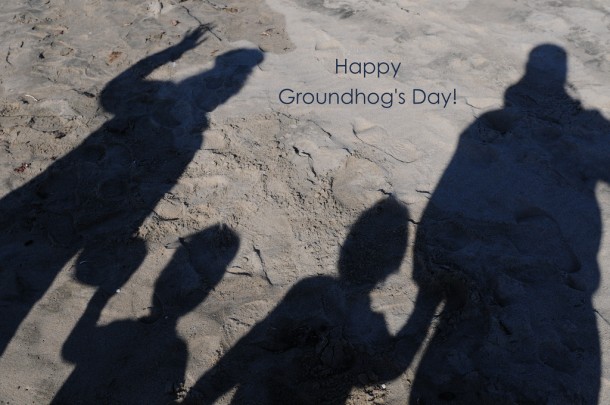 Love
This is one of my favorite pics of the boys. I love how angelic they are. Today they would be whacking each other with those arrows. 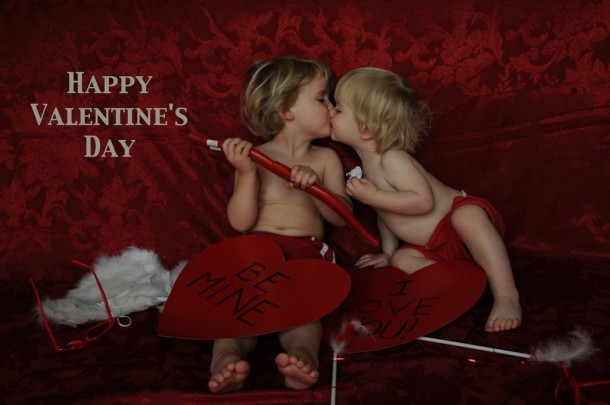 All of these pics were taken by my husband or me or using the timer on the camera. The backdrops are usually either table cloths or sheets, and the props were mostly purchased at the dollar store. A little imagination, a little planning (although I must admit some of our photos are taken the morning of the holiday), a pocket with some M&M’s, and you have some great memories and moments to share with family and friends. And as a bonus, future girlfriends, wives, and grandchildren are going to get kick out of these.

A little bit about Erin: I live in San Jose, California. I am both a full-time Sr. Product Manager developing mobile apps at eBay, and a full-time mom of two very energetic, inquisitive boys. At times, surprisingly, both jobs require the same skill sets. I’ve learned to prioritize and realize that I can’t do it all, but instead to the make the most of what I can do — and no matter what, try to make it fun.