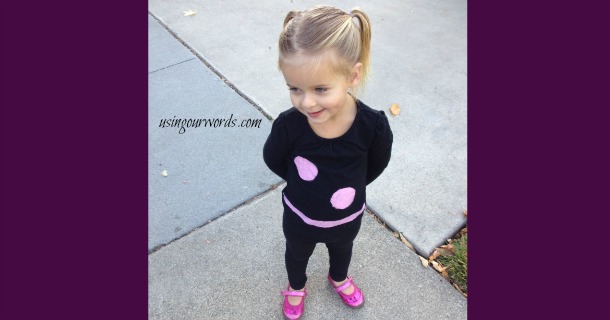 Lesson #1: Based on what we witnessed after letting Little loose with a pumpkin and a carving knife, I’m going to remove “surgeon” from my list of future hopes and dreams for him.

Lesson #2: Fashion is still in the running, though. Anyone who decides only certain character underwear should be worn for various occasions (ie school, weekends, etc), obviously has a knack for trendsetting.

Lesson #3: Spending those few hours a week while all three of my kids are in school cleaning the house has proven to be a futile effort. Because, as it turns out, they come home. I’m thinking of taking up daytime TV and bonbons instead. Those ladies are on to something.

Lesson #4: When Pink names one of her dolls after you, it’s truly the highest honor. Because then you’re in good company with “Austin” (named after the one and only tween heartthrob of Austin & Ally) and “Hot Dog” (named after this little foodie’s favorite gourmet meal).

Lesson #5: The danger of being a 2-year old with big brothers (and Radio Disney) around, is that you actually think Monstober is the name of a month.

Lesson #6: In our house, it’s a fine line between costume and wardrobe. When Little panicked and changed out of his Buster Posey digs in the car before his school parade, he was still complimented by multiple people for having a “cool costume”. Since he’s wearing his UCLA football jersey, knee-high black socks, and bright blue and yellow Adidas sneakers again today, maybe he’ll score some more candy on our walk this afternoon.

Lesson #7: A grown man walking down the street in a scary mask mid-day is no less alarming on Halloween than any other time of year.

Lesson #8: The difference between 2nd graders and 5th graders is that, in the case of the older bunch, the boys are the ones dressed up as cheerleaders.

Lesson #9: Having the same name as half my friends has finally paid off. Another lovely Aimee (with the fancy spelling, no less), made some truly spectacular pin-worthy treats for Big’s class party, and everyone was giving me the credit. The only downside? Those people obviously don’t read my blog.

Lesson #10: If you’re new to a neighborhood on Halloween, a quick way to make friends is to give out full-sized candy bars. My kids liked the newbies so much, they went back by to say hi again 30 minutes later.

Lesson #11: When you’ve lived in a house for nine years, on the other hand, you already know your neighbors pretty well. Especially the one who goes out of her way to come by on Halloween and introduce herself. Every. Single. Year.

Lesson #12: Apparently for Halloween I was a pig. After popping a 2nd piece of candy in my mouth while waiting for trick-or-treaters, Pink gave me a puzzled look and said, “You having another one?!”

Lesson #13: Though she enjoyed the comforts of everyday clothes while wearing the easiest DIY costume known to mankind — a domino, later to be deemed “Princess Donimo” — Pink has a better idea for next year’s costume. She’s going to be a football player.

Lesson #14: Planning a birthday party in this day and age is no joke. Just ask Pink. Her Baby Jessica’s birthday is in two months and she’s already frantic pulling the “green” party together. (I’m pretty sure she means the color, not sustainability, but I’ll be sure to pin some pictures come the big day either way.)

Lesson #15: After a whole lot of build up, the boys had a day off of school and got to come watch Pink’s ballet class. Big was unimpressed, and claimed it was more like “daycare with tutus” than a real dance class. (He obviously wasn’t watching my precise points and pliés. He was, perhaps, watching the mom in the corner doing her own workout while her daughter ran wild around the room.)

Lesson #16: As if playing flag football on the Stanford campus wasn’t cool enough for a birthday party, going home with some football players’ autographs and used breast-cancer awareness pink wristbands took the cake. (Oh, and Big also took the cake — literally. It was so good, he insisted on saving half his share for later.)

Lesson #17: Considering the number of times Lenny and I say, “It doesn’t matter, it’s not a competition,” you’d think we’d realize that everything in our house is a competition.

Lesson #18: For parents with little early risers, Daylight Savings is a special kind of torture.

Good luck coming down from the sugar highs and getting up with the kiddos in the morning. (I’m just hoping it’s not so light out tomorrow morning that all the parents at the bus stop notice how dark the circles are under my eyes.)