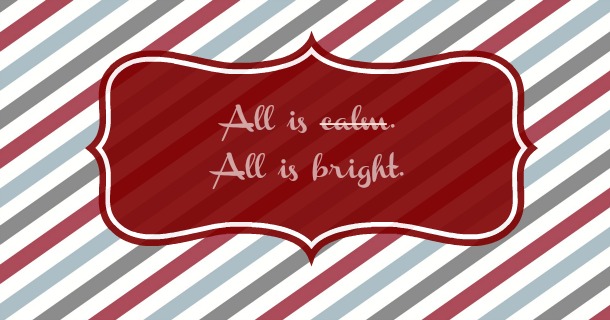 The lights, they are a-twinkling. The boxes, they are arriving. And the kids, the are a-flippin’ out. Yes, Christmas is almost here!

Lesson #1: Gingerbread house decorating was further proof that my boys have outrageously different personalities. Big spent the entire time following the pre-determined lines to go for a perfect-looking house. (While not eating the candy.) Little, on the other hand, created his own pattern and a story to go with his, which included a rooftop security camera and traps so he could catch the robbers and witches who might steal the gold and money from the stockings inside the house. (While sucking the frosting out of the tube like it was a juice box.)

Lesson #3: You’re never too young to make New Year’s resolutions. At just 5 years old, Little’s decided to take 2014 by the horns. He plans to be able to burp the ABCs by the end of the year. Truth be told, this may be the only resolution he ever keeps.

Lesson #4: While Little has broken my heart by deciding to quit hip hop, he’s made up for it by putting his awesome moves to work as a hula hoop savant. I’m one proud mama. (When I’m not trying to beat his record, that is.)

Lesson #5: When I questioned how safely the boys were playing tennis on our driveway (after watching Little run into the street for about the 15th time), Big turned to me and summed up my last five years in a few simple words, “I’m just trying my best to keep him alive out here!”

Lesson #6: Before I had kids, I certainly never thought I’d call it a victory to get my kid to “dress up” for his holiday concert by wearing a plain, logo-free t-shirt with his sweat pants.

Lesson #7: No matter how old you get, there’s always something magical about listening to someone recite ‘Twas the Night Before Christmas to a group of starry-eyed children.

Lesson #9: There’s probably going to come a point when Big’s friends actually like the fact that Pink stands outside the room where they’re hanging out screaming their names. Just not yet.

Lesson #10: One of the downsides to being a little girl growing up in a house with two big brothers is that when it comes time to potty train, you realize standing up to go to the bathroom has a very different result in your case.

Lesson #11: Based on the amount of stain remover I needed to use on a pair of Pink’s pants, I’m pretty sure she was inside my burrito at dinner the other night.

Lesson #12: Saving a booger on your finger for 15 minutes to show the family when you get home from school is a step up from eating it. I guess.

Lesson #13: I’m pretty sure if the only thing Pink opens on Christmas is a bag of m&m’s, she’ll be a happy girl. After all, “candy” is three of the six things on her wishlist.

Lesson #14: When a bird poops on your windshield as you pull out of the car wash, you can’t help but be reminded of how little control you have in life.

Lesson #15: If you’re used to your husband getting home by 6pm, 6:30pm might as well be midnight. Especially in December.

Happy holidays, my friends! I hope that each and every one of you enjoys the magic of the season. And gets a nap. A really long one. By the fire. With some eggnog. And a little extra summin-summin in there. Ooh, “and some candy. Yeah, candy.”